They left nothing undone that was consistent with the reputation of their tribe. 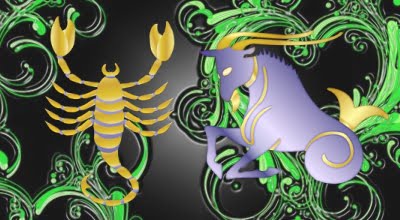 Neither Scorpio nor Capricorn finds it easy to communicate, but because their association is influenced by the 3-11 Sun Sign Pattern, they’ll usually be more conversationally at ease when they’re together than when they are with most other people they know. Only with the other 3-11 sextiled vibration of Virgo, and with the trined Sun Signs of Cancer and Pisces, does Scorpio feel as free to be himself-or herself. The same thing is true of Capricorn – with Pisces, Virgo and Taurus. Or with their own Sun Signs in the 1-1 vibrational pattern.

Scorpio and Capricorn will spend most of their time together discussing their individual and mutual hopes, dreams and wishes, and although they’ll be in general agreement regarding the nature of their goals in life, they may not be in complete agreement as to the ideal methods of achieving them. They both secretly desire to be respected, they both aspire to a quiet kind of power behind the scenes over their sphere in life, whether it be a home, a classroom, a business or a government (former President Richard Nixon is a Capricorn, former Vice President Spiro Agnew, a Scorpio); yet the Goat may deplore Scorpio’s inner in-tensity, believing it to be a waste of vital energy, while Scorpio may think the Goat lacks sentiment and sensitivity. Still, they’re both practical-minded enough to consider their divergent methods of achievement of far less importance than success or failure in the final analysis, and once they decide to trust each other, they can intermingle their abilities to increase their chances of the former.

Fortunately, the Goat will receive the retaliatory sting of the Scorpion somewhat less frequently than others, and will find those few stings easier to shrug off (Cappy tends to shrug off anything that impedes progress or takes up precious time in excessive emotional reaction), while Scorpio is likely to under-stand and be patient with Capricorn’s Saturnine broodings, for Scorpio is also susceptible to spells of inexplicable depression. This sort of astrological sympathy is evident with children of these Sun Signs, as well as with adults. Not always, but almost always, brothers and sisters undergo phases of competitive struggles, ranging from mild disagreement to what temporarily appears to be active dislike. Although Scorpio and Capricorn experience their share of sibling rivalry, these two will normally find a way to work out their difficulties sooner than most, and will usually end up defending each other against outsiders. The same pattern emerges between the Capricorn Goat and the Scorpion Eagle in business, friendship or love relationships. The association may not always be completely harmonious – but there’s always a basis for compromise, because of a subconscious comprehension of each other’s inner natures.

Although the Scorpion and the Goat are both very private people, the typical Scorpio is apt to do considerably more talking in public than Cappy. But the Scorpion uses words as a smoke screen, verbosity being utilized as a kind of substitute for (or armour against) saying what he or she is actually thinking. Scorpios are fond of all manner of disguises, and talking about everything except what’s really important to them is merely one of the many masks Pluto wears to fool the uninitiated. Capricorn recognizes and admires this ability, even envies it, for the Goat is essentially shy. Beneath the surface social nonchalance, Scorpio is also shy, or rather, markedly reserved regarding private feelings and emotions. And so, the Goat’s sometimes painful timidity touches Scorpio deeply, and is not frequently the initial basis for sympathy between them.

There are always the exceptions to be considered, of course, always those Scorps and Cappies who are influenced by the Fire or Air elements through the Moon Signs or Ascendents of their horoscopes, but the average or typical Scorpio and Capricorn will place a great deal more emphasis and concentration on getting ahead in life and insuring personal security than on social frivolities and nonproductive activities – often a shade too much emphasis and concentration. For man and woman live not by bread alone, and these two would profit immeasurably by adding not only hyacinths for the soul but a little more poetry and magic to their lives. Thanks to Saturn’s gift of the reverse aging process to Capricorn (described in detail in the Capricorn-Capricorn chapter), as Scorpio and Capricorn grow older, the Goat is likely to coax the Eagle into more exciting experimentation. One of the dangers ofa close and long-continued association be-tween these two Sun Signs is that they could get stuck in the repetitious rut of a monotonous life-style, until Cappy feels that kicking-up-the-heels urge, and wheedles the Eagle into dancing to a more daring tune – the same kind of per-suasion used by Scorpio toward Capricorn in the beginning of the relationship. Rather like the rules of American football. It’s half-time – change sides!

A somewhat amusing and one might say positive aspect to this combination (depending upon how one views it) is that Scorpio’s compulsive secrecy will not normally be a cause of friction between them, for Capricorn is seldom fascinated by anyone’s secrets. The Goat is invariably bored by any variation of a guessing game. Unless there’s a Cancer or Scorpio Moon Sign or Ascendent, Capricorns will ignore Valentines signed “Guess Who?” They are not amused by anonymous letters or round robins, and should the Eagle address a remark to Capricorn beginning with the words “Guess what!,” the reaction will probably be a polite yawn. The Goat will simply wait until Scorpio gets around to stating “what.” Cappy is not about to be drawn into such a childish challenge. The typical Saturnine philosophy concerning intrigue is that Time will eventually provide all answers, and those answers not so revealed by Father Time, in all his wisdom, are not worth pursuing (unless it’s a Mother Goat who’s poking about for information regarding her offspring, in which case she may turn into a rather persistent temporary detective).

Ordinarily, however, Capricorns are not cursed with the torture of a burning curiosity. Let Scorpio follow the starry trail of creatures from outer space, and secretly long for a “close encounter” with alien beings. Cappy considers it risky to fool around with people who might possess the kind of weapons used in the American film Star Wars. (The Goat didn’t want to go, but the Eagle insisted, with that Scorpion glare, so Cappy gave in and went to see it to keep peace.) Personally and privately, the typical Capricorn feels the whole UFO hoopla is a little silly, because it’s based more on fancy than on fact. If such creatures do exist, Capricorn will gladly walk out in the backyard to watch them land in the strawberry patch, but vicarious experience doesn’t thrill the Goat. Capricorns have small use for peek-a-boo or hide-and-go-seek, whether as children or adults. If a person has something to say, Earthling or Alien, let it be said now flat out – instead of all this telekinetic and telepathic beating about the bush.

Most of the time, Capricorn’s boredom with curiosity in all its forms will please the Pluto-ruled Scorpions, since nothing makes them angrier than to catch someone snooping in their diaries, checkbooks, sock drawers or private thoughts – until and unless they choose to share their secrets. But now and then, the ultra-sensitive Scorpio man or woman will take offense at Capricorn’s refusal to be curious, and interpret it as a lack of interest – which is exactly what it is.

The Goat’s lack of interest, however, is not synonymous with a lack of caring. Yet, with Scorpio, a lack of interest does indicates a lack of caring, for Scorpios are curious only when they care about something, and when they don ‘t care, that thing or person becomes invisible to them. The problem with Scorpio curiosity is that the Eagles tend to stretch it into suspicion. They tell themselves that a little suspicion is a healthy thing, a protection against those who take advantage of the gullible. But suspicion has its negative side too, and can cause Scorpio to suffer many groundless fears. Capricorns, on the other hand, have no need to trouble themselves with undue suspicion, because the Saturnine caution accomplishes the same self-protective purpose with much less wear and tear on the nervous system.

For all their uneasy suspicions, Scorpios are metaphysically and religiously driven; therefore they believe intensely in the power of faith over all manner of failure (even when they don’t openly admit such faith), and this is a major difference between the Pluto-ruled Scorps and the Saturn-restricted Cappies. “If you really want it,” preaches the Eagle to the Goat, “believe you’ll attain it, and you surely will.” But Capricorn remains unseduced, unmoved, and replies with one of Saturn’s own religious beatitudes: “Blessed are they who expect nothing,” preaches Cappy, “for they shall not be disappointed.”

Sometimes the philosophical debates between these two do somewhat resemble a church service on a gloomy Sunday, with inspired Scorpio giving the sermon and practical Capricorn passing the collection plate. Yet they’re both soul-softened by the sound of the choir and the organ, even when they’re singing from different hymnals. Music has a way of filling the space between their attitudes, because music speaks the language they both hear in their hearts but are unable to express in words, and they should not allow themselves to live without its blessing. The finest stereo available would be a sound happiness and harmony investment for this Sun Sign combination. To the Eagle and the Goat:

Don’t wait for a sale. Buy it now – and never mind the cost.

Never mind the cost?!!! Just look at them. Scorpio is frowning, and Capricorn has turned pale. You see? There are some things these two have in common.