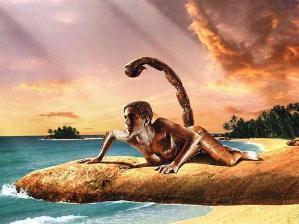 Let’s look at the figure which symbolizes Scorpio. In very ancient astrology – Egyptian, Chaldean and Hebrew – Scorpio was represented not by the familiar scorpion, but by the serpent. This is a profound symbol which tells us a lot about Scorpio. Firstly, the serpent sheds his skin cynically, and was thought by the ancients to be immortal and capable of constant self-renewal. Now this pattern of outgrowing a skin, sloughing it and growing a new one runs through Scorpio’s life. Often his life breaks up into distinct chapters, as he moves through one cycle after another. All come to ultimate destruction. Then he rebuilds and starts again.

The serpent is also, in ancient mythology, a symbol of the wisdom of the earth itself – timeless, ancient, knowing the secret of life of all things. He moves close to the ground, and hears the secrets of the roots of things. In Biblical lore the serpent is the Devil, the Father of Lies, who tempted Eve in the Garden. He is Lucifer, the fallen angel. You can see that he has a double face. You can take him as dark or light, good or evil, for he contains both. And so does Scorpio. He has equally great power for good or evil, healing or destruction. Goethe (who had Scorpio rising) created a typically Scorpionic figure in Faust, caught between the extremes of heaven or hell.

The Scorpion, a more recent development traceable to Greek astrology, is in some ways a less descriptive animal. But he can give us some valuable clues about the Scorpio temperament. Firstly, he is an isolated animal. You don’t find herds of scorpions roving the desert munching flies together. Scorpio, the human being, is also not a collective creature. He usually dislikes crowds, mistrusts loud, extroverted parties, and prefers a small circle of trustworthy friends or a single lover. Secondly, although the scorpion is a deadly creature (not all varieties have a fatal sting, but they all give nasty bites), he is completely nonaggressive. Scorpions will not attack other animals. On the other hand, if you are silly enough to step on one, well, it’s your problem, isn’t it? You should have watched what you were walking on. Attack this tiny creature and he will move in for the kill no matter how much bigger you are. Scorpio people have an acute sense of justice. They don’t believe for a minute in all that sentimental stuff about turning the other cheek. You give back as good as you get, for it’s the only way to survive. Scorpios make bad martyrs – unless, of course, like Ghandi, the posture is necessary to prove a point.

There is a fascinating legend about the scorpion: if you corner him, and give him no avenue for escape, he will sting himself to death. This sounds a little apocryphal. But I have seen it happen. Once in the south of France I watched a group of children surround a small brown scorpion with sticks, so that it was completely trapped. It committed suicide. The message here is that Scorpio would rather destroy himself, and go down in flames by his own hand – literally or psychologically – than submit to another’s ultimatum or control. It’s that damnable pride again. ‘Better to reign in hell,’ as Lucifer says in Milton’s Paradise Lost (Milton had Scorpio rising), ‘than to serve in heaven.’ If Scorpio ever truly bows his head, he has learned one of the most valuable lessons of his life. More likely he’ll go through the sham of bowing, and pay you back threefold later. He will usually, in the end, only submit to whatever he understands as his gods. And he sometimes has some pretty peculiar gods, this enigmatic fellow. Find a Scorpio who has gone apathetic and outwardly submissive and you’ll see someone eaten up from within with furious resentment and jealousy. Often this is unknown even to himself. Then you’ll come up against real destructiveness, of the worst kind – like in those ‘happy’ families where the wife quietly sabotages her husband’s masculinity and loads her children with guilt in revenge for her unlived life. Repressed Scorpionic rage isn’t pretty. Nobody promised it would be. But every Scorpio has the courage to face whatever is in him, and transform it. As we said earlier, Scorpio has no illusions about life.

There is one famous myth which is particularly fitting for Scorpio. It’s one of the twelve labours of Hercules. In this particular labour he is told to slay the Hydra. Beneath the outward success and power, this myth describes Scorpio’s real destiny. Hercules is sent to destroy a large, deadly creature called a Hydra, which inhabits a dark cave in a swamp and preys upon the folk of the countryside. The Hydra is a serpent-like beast with nine snake heads, each of which is equipped with deadly poison fangs. A sort of multiple cobra, you might say. And it has a very nasty propensity: cut off one of it’s heads, and it sprouts three new ones in return.

Hercules at first attempts to club the Hydra to death, then to slice its heads off. He is about finished, since this results in a proliferation of heads. Then he remembers a piece of advice given to him by a wise teacher. The Hydra cannot stand the light. So Hercules gets down on his knees and lifts the creature up into the sunlight. It shrivels up and begins to die. Only one head remains, for that one is immortal, and buried within it is a precious jewel. But one head is easy for Hercules to handle. He simply buries it under a rock

The explanation of this myth isn’t really necessary for Scorpio. They usually come, sooner or later, to that place in life where they discover the hydra within themselves. But some explanation may be of value to the less introspective signs. We can say that the hydra can mean many things: jealousy, vengeance, resentment, anger, frustrated sexuality, violence. Scorpio is a sign of intense desire; and the hydra’s many heads can mean the many desires of the uncivilized human heart. Left to grow in the darkness, they can become poisonous, and begin to destroy others. But they cannot be dealt with by repression. They must be understood, held up to the light, respected as part of oneself. And although vanquished, it is a good idea to remember that one immortal head. For Scorpio, all human beings carry within them the seeds of good and evil. Evil is not an abstract thing, or somebody else’s fault; it is in everyone. Human brutality cannot be blamed on society, but ultimately only on oneself. It is relevant to realize that Freud, the great founder of modern depth psychology, had Scorpio rising. Therein lies the deepest meaning of Scorpio’s myth: come to terms with the hydra in yourself, and you redeem the world.