The most haunting time at which to see them is at the turn of the moon, when they utter strange wailing cries; but the lagoon is dangerous for mortals then …. 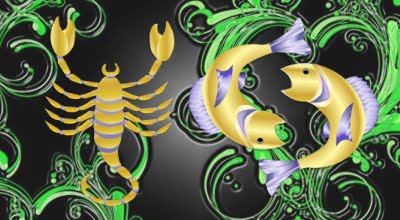 If there were ever creatures more fey than these, who live in a world more ephemeral and haunted with the unspoken than the Fish and the Scorpion, they would exist only in Middle Earth. Indeed, these two (like Pisces and Cancer, and Scorpio and Cancer) do exist in a sort of imaginary Middle Earth of their own – near one of its lagoons, of course. Very few of their friends can understand them completely when they’re together, but they do understand each other, deeply … and usually divinely.

This is another of the 5-9 Sun Sign Patterns, this particular one vibrating through the Water Element, which is more mystical and mysterious, more in-tangible and elusive, than the vibes of the Fire, Air or Earth 5-9 Patterns. Pisces and Scorpio are magnetically drawn together by means of a silent and powerful understanding. I know a Fish and a Scorpio Eagle who didn’t have this sort of instant empathy when they met, and still do not. But that’s because the Eagle’s Ascendent and Moon are both in Virgo, opposed to the Sun of the Fish, and other mutual planets are also in negative aspect between their charts. Still, because of the natural trine between their Sun Signs, the 5-9 influence has caused them to try very hard to comprehend each other. Even when other planetary configurations dilute the trined Suns’ positive effect, there will nevertheless be much understanding, some attempt at closeness and almost never enmity or outright disharmony.

Whether the association is that of parent and child, teacher and student, friends, business acquaintances, lovers or mates, Pisces and Scorpio will usually tune in to each other’s minds like a couple of short-wave radio sets on the Eternal Now frequency. Normally (which means not always, but usually) there will be amazing telepathic communication between them, once it’s established that they are more than mere nodding or casual friends. This will be true whether they’re separated by a room or by a continent. Yes, even if they should be separated by dimensional levels, such as what is termed “living” and what is termed “dead.” Astral connection of this sort doesn’t depend upon distance for its power base, neither Earth distance nor the distance between the third and fourth dimensions of “life” and “death,” respectively.

There will be times when the two of them will wander around in a classroom, office or house without an outward sign of the realization of each other’s presence. Anyone else in the vicinity may swear the two didn’t even notice each other, for often they say very little, back and forth. The typical Fish and Scorpion frequently speak without speaking, because they share a silent sympathetic thought pattern and are therefore able to communicate without verbal contact (words are superfluous), more or less in the telepathic manner of the visitors from space who have been said to communicate with Earthlings – not quite, but with the same conceptual blueprint.

The Scorpio mother frequently knows, without being told, when her Pisces son or daughter is troubled – even why. And vice versa. The Pisces employer comprehends his or her Scorpio employee’s tension – and the cause for it. And vice versa. Piscean and Scorpio lovers and mates – or friends – even playmates (children) can sense each other’s joys and sorrows. They understand each other’s silences more comprehensively than other people understand one another’s conversation.

With all this empathy, you’d think these two would have nary a problem area to their names. Unfortunately, this is not the case. Heaven on Earth, although growing ever nearer, has not quite yet been established. The first problem in the relationship between the Fish and the Eagle is that of weakness and strength. Guess who usually wins that battle in the final inning – which is stronger, which is weaker? Don’t be afraid to hazard a guess. You know enough about astrology now to be tested.

The Scorpio is stronger, the Piscean weaker? No. It’s the other way around. Maybe you didn’t notice the structure of the question, which included the phrase “in the final inning. /I Admittedly, Scorpio would seem at first to be the stronger of the two. They are both of the Water Element, and since water is the strongest of all the elements, for reasons I’ve told you elsewhere in this book, this means they both have the strength of endurance. In addition, Scorpio has all that Pluto power I’ve been writing about – or that you’ve heard or read about elsewhere. However, Pluto power is based, to a large extent, upon EGO. Human ego. Neptune power (Neptune being the ruler of Pisces) is based upon a force no weapon in Heaven or on Earth, in any solar system, universe or galaxy, can conquer. Its name is … humility. You notice I capitalized EGO, and wrote humility in lower case? That’s the very reason the latter is more powerful than the former, when all the scores are counted. It has a great deal to do with ” … many that are first shall be last; and [many that are] last shall be first.” The message requires meditation.

On a human personality level, the Scorpion who starts out in a relationship with a Piscean believing that he or she can swallow this poor little Fish through the force of a stronger and more intense nature – is going to be surprised. You know how difficult it is to surprise a Scorpion. But it can be done. In a contest of wills or a contest of surprises, the Fish will spring the last surprise. And it will be a real shocker, quite unexpected.

Look at it this way. If you saw a Nature Scorpion in some sort of contest with a Nature fish, which of the two could move faster and more unpredictably? You’d rather use the Scorpio Eagle as a symbolic example? Fine. You’re on!

Which can disappear more quickly, without leaving a sign or a trace – a fish in the water, or an eagle in the sky? Look. The fish is gone but the eagle …. .well, see that speck over there behind that far cloud? Use your binoculars. Now you see the speck, right? Don’t try to use your binoculars to spot the fish. Binoculars don’t work in “the Deep.”

I hope they don’t quarrel about money. But they might. The typical Fish is generous to a fault (if there is such a thing, which I don’t believe there is, since no amount of generosity ought to be classed as a fault) and so is the Scorpion, when it comes to close friends, family and what the Pluto-ruled call “the deserving.” Scorpio is unstintingly generous with these, but with everyone else the Eagle can be a trifle stingy. Pisces is not really concerned with the beneficiaries of his or her giving. Not all, but most Neptune people unconsciously follow the apple tree philosophy. The apple tree does not ask of those who enjoy its fruit”Are you deserving? Are you a friend or relative?” then pull back its branches if the correct password is not forthcoming. The apple tree gives to the deserving and to the undeserving alike, for the same reason – without giving, the tree would die. This is somewhat the same way the average Piscean feels. There’s something within the Neptune heart which would wither up and die if the boy and girl Fish were not allowed to give freely when the spirit moves either to do so, which can be wonderfully often.

Pisces might help Scorpio comprehend the meaning behind the Nazarene’s words, when he asked, “Why are you so concerned with your riches? O! ye of little faith! You ask, what are we to eat, what are we to wear [where are we to sleep? and so on]. …. Seek first the Kingdom of Heaven [within yourself! and all the rest will come to you as well. /I

Since Scorpio has a burning desire to prove the truth-behind-the-truth of all religious mysteries, any Eagle will benefit profoundly from pondering those words. Only when Scorpio truly comprehends that message, with ultimate compassion, can the Fish and the Eagle travel an enlightened path hand-in hand and heart-to – heart …. a smooth path, swept clean of the pebbles of disagreements, competition or misunderstandings. Most Pisceans truly take “no thought of the morrow,” sincerely believing that “sufficient unto the day is the evil thereof.” More than sufficient, in the opinion of the majority of Fish, who are forever, it seems, becoming entangled and involved in everyone else’s troubles, in addition to their own – including those of the postman, the neighbor’s dog or cat, the grocer, the President of the United States, Aunt Samantha, an airline, Muhammad Ali and various assorted friends, relatives and public figures.

Conversely, being a Fixed Sign, Scorpio takes quite a lot of “thought for the morrow.” It’s a compulsion. The Scorpion Fixity pulls on these men and women (and children) to be sure there’s something stashed away for lean dayssome sort of insurance in case of a blow from Fate or an Act of God (same thing). Scorps tend to look far, far ahead, in order to prepare themselves for whatever calamities might occur in the future. Cancerians do this also, but theirs is not quite the same kind of caution, because the anticipated accumulation of cataclysms, tragedies and emergencies feared by Cancer actually occur only a small percentage of the time, relatively speaking, whereas those that Scorpio precognitively senses nearly always do occur (unfortunately) right on schedule. Noah was probably a Sun Sign Scorp (or had the Moon or Ascendent in Scorpio).

It won’t be easy for the also psychic Fish to argue Scorpio out of this point of view. Even a Piscean would have made little impression saying to the Scorpio patriarch prophet, “Listen, Noah – everyone thinks you’re meshugana for making such a big mishagosh about a little puddle of water that will probably dry up by morning.” In truth, although Pisceans are much less inclined to fuss
and fret about imagined future troubles than the Pluto-ruled, when it comes to a really strong hunch or intuition, the Fish may lose his or her careless, casual detachment and share the concern of Scorpio. In rare situations, that is. Most of the time, Pisces believes Scorpio stirs up a fine tempest in a teacup. There are, naturally, exceptions, but one might note that Scorpio tends to silence, followed by periods of brooding – while Pisces tends to talking, followed by periods of brooding. It’s the Neptune-Pluto pattern which either begins at variance, then trails off and meets in similarity somewhere before the end of the path – or which starts in unison (with the brooding) but trails off in a different direction before the end of the path. (This is a deep and vital meditation, worth studying, not just skimming.)

Again allowing for the exceptions; some Scorpios are, generally speaking, a shade more likely to pursue a college degree than Pisces. “Just think,” remarks the Eagle, “what Machiavelli might have done under such pressure as I have been subjected to lately, if he had been in my place.”

The Fish can’t think, because he or she isn’t quite sure who Machiavelli was. But Pisces will look it up afterward. When people tell Pisceans something, they like to follow through. Even though a Fish may scoff at college, he (or she) is secretly impressed with what others learn in the halls of ivy. That is, a Fish is impressed until it’s discovered that the Scorp with the Bachelor’s, Master’s or Doctorate can’t comprehend how the human voice could have been recorded on a piece of quartz in Atlantis – or even if it could have been. “Well,” says Pisces, “you see, it works something like this. . . . .”