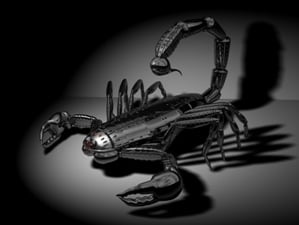 What can we say about the dark side of Scorpio, when he is already so well acquainted with his own darkness? This is a water sign: full of feeling, subjective in approaching life and people. Scorpio has the courage to face all manner of things, but this usually lie on the emotional plane. What he often can’t face is the degree to which his reactions are governed by his opinions. We said earlier that the water signs as a group, tend to opinionatedness, because they are so often unaware of their own thought processes. Being so subjective and concerned for their own personal values, it is difficult to see the clear, fair, bird’s-eye view of things. And here is one of Scorpio’s greatest blind spots. He can be downright fanatical in his views about people and life. And this fanaticism can, in the wrong place and at the wrong time, spur him into some pretty unpleasant actions based on biased or distorted judgment.

Let’s take an example of this in everyday life. Let’s look at the Scorpio woman who has been hurt in a succession of relationships. For all her insight and sensitivity, you will find that a lot of Scorpio women have formed fixed, crystallized opinions about the opposite sex. Big, blanket generalizations. Like, ‘All men are bastards’, or ‘No man can be trusted’, or All men are unfaithful’.

Here is a typical scenario. We might call it the Othello syndrome.

SCORPIO WOMAN: Where were you tonight? You said you’d be back at eight. It’s midnight. (This is invariably said in an accusing tone of voice, making it perfectly clear that whatever explanation is offered, only one will be believed.)
AIR MAN: Sorry, dear. I had a frenetic day at the office. Then the car broke down, and I spent two hours trying to fix a leaking radiator. It’s just been one of those days. (A note of defence creeps in. Resentment about being mistrusted. Preparation for becoming cagey if pressed.)
SCORPIO WOMAN: (Silence. The atmosphere becomes visibly chilly. Icicles form around the dinner dishes. When he tries to touch her affectionately, she recoils. She is thinking to herself: he’s cheating on me. Bastards, they all do it in the end. I’ll be damned if I’ll let him use me like that. Right. No sex for a month.)
AIR MAN: What’s wrong, dear? I told you, I couldn’t help it.
SCORPIO WOMAN: Nothing’s wrong, dear. (Stony glare. She imagines he knows she knows, and is trying to make him feel suitably ashamed. He hasn’t the vaguest idea what is running through her mind.)

Give one of these a week, a year, ten years, and you have a real horror show, straight out of Who’s Afraid of Virginia Woolf? Scorpio can ravage a marriage, a love affair, a home, with this kind of behaviour. It isn’t sufficient to just say it’s a jealous sign. There are many kinds of jealousy. Possessive, yes, but all water signs are possessive. But Scorpio’s pathological jealousy isn’t simply fear of losing a loved one. We all fear that. Underneath you will find some bitter little vision of life, some black belief about the fundamental rottenness of men/women or whatever. Scorpio’s shadow is his negativity, couched in rigid opinions which lurk below the surface and often torment him at the moments when he should feel happiest.

It takes a long time for Scorpio to learn to trust and to forgive. Usually he’s learned that mistrust early in life, from seeing the dark shadows standing behind his parents and his religious upbringing and his education. And the wound takes a long time to heal.

It isn’t the vindictiveness in these classical situations that is really the problem. Although we’re taught that it’s un-Christian, a little honest revenge is often healthier than the outward show of acquiescence and the inner, repressed anger that spews out through indirect channels that so many of us call being ‘good’. Besides, sometimes it does a world of good for someone to get back what he’s just dished out; it might stop him from doing it again. What’s really wrong here is that Scorpio never gives the other person the benefit of the doubt. The opinion is already formed, prepackaged like frozen vegetables, ready to be trotted out and tacked onto the offender regardless of whether it’s true or not, and without knowing the facts of the situation. Water signs are uncomfortable with facts. Facts confuse the issue, which for water is primarily how it feels, not what really happened. Scorpio’s shadow side completely ignores the other person’s viewpoint.

This is a pretty hard thing to live with. You can see its traces not only in individuals, but in political and religious ideologies as well. Certain astrologers have considered that Germany is traditionally ruled by Scorpio. Where else but in a Scorpio could you have a single fanatical idea – anti-Semitism – arise with such force to take complete possession of a nation with such destruction following in its wake? The Scorpio who cannot deal with the hydra within himself will project it into the world and see it in others. Then you have the persecutors who believe it their mission to redeem humanity at gun-point. St. Paul was said to have been a Scorpio. Much of the bloodshed committed in the name of Christ throughout the ages stems from his interpretation of Christianity. Never forget that Scorpio is a sign of great power – for good or ill. No Scorpio, however apparently insignificant, is without influence over those close to him. See that mild little man over there in the grey suit, reading the Wall Street Journal? He may not think about things like witch-hunts and the paradox of violence in the name of Jesus. He may not have read Faust, or Paradise Lost. But he’s a Scorpio. He has insight and power, however repressed. And he can make of his life anything he wishes.