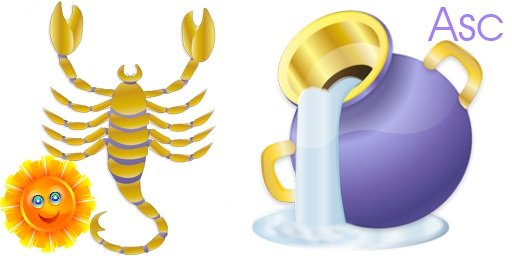 Tightly wound, big attitude Aquarius coupled with Scorpio’s suspicious, investigative nature makes for interesting and alert people with an electric light bulb intuition. They’ve an eye in the back of their head. Because they’re always on edge, convinced that “the crap is gonna hit the fan,” they’re prepared for any emergency. It’s Aquarius’ electronic vigilance that avoids the explosive consequences of ignoring trouble spots and warning lights, so they’re naturals at handling dangerous situations. Compared to everyone else, handling emergencies is a snap for these people. Circumventing danger is “all in a day’s work!” So they’re often found in cockpits, on battlefields, at the scene of a fire, or anywhere else that requires adrenalin, fast-thinking, and a knowledge of safety procedures. In tandem with a Scorpio sun sign, the Aquarius personality is as competent and “on the ball” as ever. But these Scorpios need to avoid letting their suspicions rob them of their serenity and leave them stressed-out and unable to relax. Their “Halt! Who goes there?” posture sometimes amounts to a very unhealthy paranoia. If they can separate intuitive insights from uptight anxieties, they become masterful detectives. But that’s no easy task. On a bad day, they’ll check the locks over and over, not quite believing everything’s secure. The bottom line is that Scorpio’s investigative instincts are extra useful when they’re plugged into Aquarius’ computerized, World Wide Web awareness. Properly integrated, the possibilities are endless. With objectivity and a communal purpose, they’re wonderful police officers, alert and ship-shape, part of the team, and adhering to the rules as true believers in the system.[..]

If these energetic, highly motivated Scorpios temper their insight and alertness with tolerance, humor, and a lighten-up-and-move-along attitude, they shine like the Electric Light Bulbs they were born to be. They’ll earn the respect and cooperation they deserve for their conscientious approach to life. If they’ll just relax and be a little more trusting and accessible, they’ll be pleasantly surprised by the improved reactions they get from people.