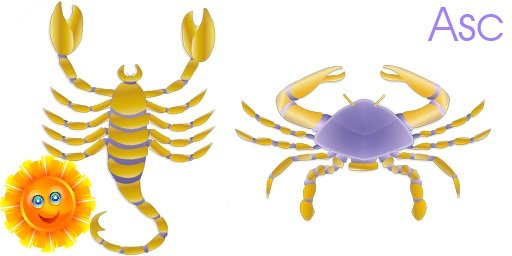 Here’s “still waters run deep,” for sure! Cancer’s “feel my way along” blends well with Scorpio’s “look for the hidden meaning.” There’s a lot of introspection and uncertainty here. These people keep most of their emotions under wraps. They hold onto their experiences and aren’t quick to share what’s on their mind.

When the Cancer personality’s willing-worker is fueled by Scorpio’s full-blown gusto, extra hours studying accounts at the office or planting extra rows of crops in the field are second nature. They can barely stop themselves from showing up early and staying late. Cancer often gravitates toward public places, so these Scorpios might be naturals at running restaurants, stores, or small businesses that deal directly with consumers. They’re wonderful hands-on managers, and unlike some sun sign/rising sign combinations they cooperate with authority figures in the workplace. But that “hands-on” Scorpio quality, as well as Scorpio’s innate fertility, might lead them to vocations that involve direct contact with the earth, and if Cancer’s “down on the farm” inclinations lead them to some aspect of agriculture, they’ll find success growing corn, breeding rabbits, or other such ventures. When these folks are gentle and well-meaning, everything grows green and strong. Scorpios with Cancer rising accumulate things—oh, my do they love to accumulate things! Antiques, family heirlooms, children, grandchildren, cats, dogs, you name it. And they are never ever wasteful. There’s an avarice in both signs that often expresses itself through holding on to property. These Scorpios might hold the deeds to several parcels of land; they might be collectors; sometimes they’re like human magnets. But whatever accumulates, the Cancer personality maintains and nurtures it. If it’s breathing and hungry and crosses their path, it will get fed—andit might not ever leave. If it’s a car or a computer, it will be maintained impeccably.