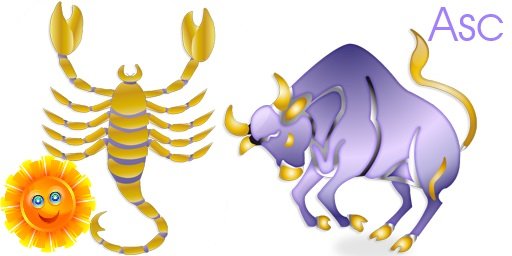 This is an obliging dinnertime birth with focus, determination, and a very definite purpose. Scorpios with Taurus rising know how to stand their ground without budging while considering everyone else’s position. Now that’s a trick! And, with undying persistence, they usually get what they want. So they tend to be the kind of people whom everyone wants on their side. But there’s likely to be a heavy dose of avarice when Scorpio’s materialism meets Taurus’ hunger for satiating the senses and accumulating things. These Scorpios appreciate the finer things in life, whether it’s the feel of fine leather, the bouquet of a fine wine, or the delicious taste of a well-prepared meal. They’re protective of their personal comforts, and they tend to amass a good deal of personal property. And being deliberate and diligent enough to get what they want, they usually enjoy a comfortable, and maybe even affluent, lifestyle. But if they aren’t careful they’ll fall into a “me, me, me” mindset that isolates them from people who resent what appears to be—and often is—selfishness. Plus, they sometimes accumulate so much that everything they acquire ultimately owns them, leaving them to say in their last breath, “I’da seen the world, but I had the farm.” They need to broaden their scope, however possible.

Taurus, the Banker, rising can lead these Scorpios to success in careers involving financial institutions. They’re good at getting a foot in the door and masterful at closing a deal. They often do well in real estate. They’re a bit narcissistic and usually understand the importance of “dress for success.” In their professional lives, as well as their personal lives, they smack of tastefulness. And they’re loyal to the people closest to them. If they’ll exercise their loyalty and be fair enough to “spread the wealth,” they’ll make things easier and more rewarding for themselves and the people they hold dear.