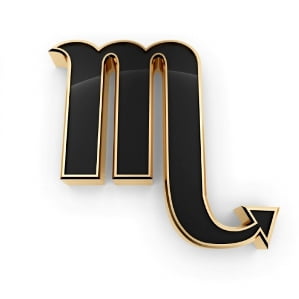 Scorpio is a sign veiled in mystery. Concealed within its nature are the great secrets of sex, death, and rebirth. It has been called the “accursed sign” by individuals who have no idea of the deeper meanings behind the functions associated with it. These are the people who abuse sex, fear death, and deny their own immortality.

There are two glyphs associated with this sign; both signify behavioral characteristics of the different Scorpio types. The first depicts the coils of the serpent (an animal closely connected with the eighth sign), with its poisonous fangs ready to strike an adversary. It is also a symbol for the concentrated tension in the sexual organs of the male in a state of excitation. It therefore represents the latent procreative powers and the force of impregnation of the male force in life or Spirit. This same glyph can also be seen as the scorpion with his barbed tail raised in order to inflict death on his chosen victim.

The second glyph shows the same coiled tension of the snake, scorpion, or sexually potent male, but the venom, poison, or semen is hidden, the energy which these fluids contain will be infused much more subtly into the intended objective. The method used is as powerful, but less violent.

Some explanation of the nature of the relationship between sex and death should be given here so that the reader will be able to obtain the astrological view of these two life functions and begin to appreciate the wider and more esoteric values of the much maligned Scorpio.

Sex and death are both vehicles of change. Through the sexual act, a subtle alteration is brought about within the essences of the two human beings who are having intercourse. They are exchanging each other’s life-forces, and with constant and successful mergers they will eventually join their beings together. They become united not only on the physical level but on many emotional and mental levels. The sexual act works as a transformer of the two electrical energies (positive and negative), which combine to generate new currents, i.e., an offspring of the union. But even without a child as an ultimate consummation of Man and Woman, the force of sexual activity causes tremendous psychic changes in the people concerned. This is one reason why astrologers and students of the occult, in general, are very careful in their personal use of sexual energy and in their selection of lovers and mates. They realize that the sexual act is an actual interchange of one’s atomic structure and that each sexual encounter causes one to take on some of the other individual’s life essence and Karma. For those seeking the Light of higher consciousness, this is a most important factor in their development. We will speak more about this, later in the chapter.

For the moment let us turn our attention to sex in its procreative purpose and relate it to death. When the male spermatozoon and the female ovum meet in conception, both gametes lose their separate, individual natures. In essence, they die, for they are no longer in their previous state of existence; they have ceased to be as they were.

In place of the separate sperm and egg is a zygote-the first cell of the embryo, containing all the genes of the newly formed being. Later on, at the quickening (about the seventeenth week of pregnancy), the soul enters into this physical form and a human entity is created, who will need the remaining twenty weeks of pregnancy to grow a body strong enough to withstand the atmospheric and emotional pressure of life outside the womb. In conception, the male and female essences have each sacrificed its own separateness so that it may merge, by the force of creation (the sexual act), into a larger whole. The latter has the nature of each of the parts but is greater in its unity.

The above is but a small fraction of the secretiveness and sacredness of sex. When one dies, much of one’s earthly known individuality changes its form and is never the same again-it is obliterated, annihilated, finished! This part consists of the personality we used during our Earth life. The ego, that sense of “I-am-ness,” also must change in its essence. It must eventually merge with the greater “I AM” of the Spirit which permeates all life. As one grows in consciousness, one experiences this constant transcendence of the personal ego as the Universal Spirit enters and permeates one’s being.

Just as the snake sheds its skin so that a larger body may emerge, Man sheds the layers of his consciousness so that a larger (and finer) Self may be born. Individuals who are in a conscious state of growth can look back upon the snake skins of personality they have already shed over the years. They can see that the person they were is no longer alive and that a new being stands in his place. All the cells in the physical body are completely renewed each seven years. If the consciousness of the person also renews itself by intercourse with the generating flow of Spirit, he can see himself reincarnated in his or her own lifetime.

Physical death frees Man from his separateness and allows him to merge with a greater Self-his own Self to be sure, the Self which is waiting for him, the Self toward which he is growing by shedding his skins. Sexual intercourse and death are processes which allow new life and new forms for that life to develop. Just as the individual sperm cell fights its way through the stream of seminal fluid so it may unite with the egg and thus be an agent of creation, so Man must fight his way through the stream of the life-force, ever developing his consciousness through his many births and deaths until he merges with the Source of his immortality: As above, so below.