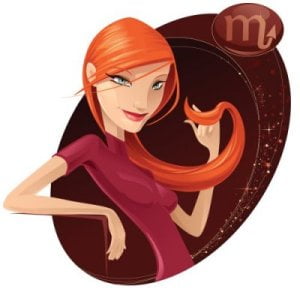 There are two keywords you should remember about the Scorpio woman: depth – meaning that hers is a subtle, complex, and never obvious temperament, and will – meaning that this woman is not about to bow her head to anyone or anything, unless it’s temporarily necessary to achieve an end. You might also keep in mind other Scorpio qualities: the famous possessiveness, intensity, pride, loyalty. No Scorpio is either easy to understand, or easy to live with; but then, if you wanted something light and frothy and unobtrusive, you’d be with someone else, wouldn’t you? Let’s consider the business of depth. Scorpio is a sign which never takes a superficial view of life; it’s almost impossible for the Scorpio woman to accept something at face value. This can span a pretty broad range, from the caricature Scorpio who, when you say ‘Good morning’, wonders exactly what you mean by it, to the Scorpio whose motivation and deepest need is to understand – both herself and the people around her. In short, this is a woman who expects something more from a relationship than surface tokens. Love, to Scorpio, is more than demonstrations of affections or security or sexual gratification, or even intellectual camaraderie. It’s a bond which – hopefully, from her point of view – touches the soul, and means no secrets. No secrets doesn’t mean the superficial way of interpreting it either, like where were you at five o’clock on Thursday afternoon. It means that she expects honesty of character. Scorpio, being a water sign, has a lot of compassion, which usually comes from her own propensity to torment herself. The Scorpio woman is probably more capable than any other of both understanding and accepting human weaknesses and human darkness. She’s not afraid of ugliness, internal or external, because to Scorpio dark and light make life interesting. What she can’t stand is the hypocrite, the person who lives in pretence. If you need your masks and your props, stay away from this woman, because that x-ray eye will see through the lot; and she won’t stop at seeing, either. There’s a strong tendency to try to remake others in Scorpio, and the Scorpio woman will often take it upon herself, consciously or unconsciously, to help transform you – especially if you’ve got a lot to hide.

Unfortunately for her, there are a great many men roaming the world to whom the idea of being emotionally honest, or straightforward in revealing their own motives, is absolute horror.

Not that that’s such a reprehensible thing. It isn’t easy to face the mirror, not to the degree Scorpio thinks you should face it. But this is the one area where the Scorpio woman shows her intolerance. She can accept anything in anybody except what she considers to be weakness of character – that is, the person who hasn’t the strength to face himself. And she can be pretty scornful, and pretty scathing, if she feels let down.

That propensity for depth is a double-edged sword. On the one hand, it makes her a rare woman, because she’s capable of not only seeing but also sharing your pain and your dreams and your burdens; and her enormous strength of will and loyalty are unshakeable even when yours are flagging a little. But her expectations are high; and it isn’t easy to live up to them. Basically, she expects that you, like her, should want to be constantly engaged in the great alchemical work of transformation, nothing less. If you happen to prefer sailing and cowboy films to introspection, you might have to explain yourself. Your only chance is in convincing her of the justice of your rights to be yourself. Justice is a thing the Scorpio woman understands. Her sense of justice is so keen and so sensitive and it’s virtually inflexible. If she thinks you’re in the right, then she’s capable of sacrificing completely her own desires and opinions. If she thinks you’re in the wrong, and you don’t apologize or change your viewpoint, she’ll retaliate.

Let’s talk about retaliation, since, if you’re involved with a Scorpio, you’ll have to get used to the concept. Scorpio’s sense of justice, as we mentioned, is pretty acute. It isn’t an intellectually based judgmental faculty like Libra’s either; it’s a powerful, gut-level, emotional reaction to any situation where she feels she’s been abused and treated wrongly. This can range from being rejected or insulted – which in the case of the more paranoid Scorpio may mean an imaginary rejection or insult – to betrayal. Betrayal is perhaps the thing she hates and fears the most. And if she feels betrayed, she’s more likely to strike back than to turn the other cheek. Nice Christian patience and mildness are not, repeat not, qualities which you should be trying to find in Scorpio. It’s good basic, primitive stuff – eye for an eye, and all that. Never maliciously, or with cruelty. Just enough to teach you a lesson.

Does it sound a little hair-raising? Well, it depends on how you look at it. The Scorpio woman’s feelings run deep and intense, and she doesn’t like them to be taken lightly. She’s hurt easily because of this intensity and sensitivity, although she can’t really be hurt by people in general – only those few she really cares about. Scorpio is extremely selective in love and friendship. Everybody else can go to hell. She isn’t intimidated by either public disapproval or snide comments or gossip behind her back. Only from those people who she loves and respects can a criticism or a rejection wound. But then it really wounds. And whether you argue philosophically about the rightness or wrongness of it, that’s her stance. Injure her and she’ll injure you back, if at all possible. Unless, of course, you did it accidentally. Then she’ll forget about it immediately, because that isn’t the same thing.

Scorpio has a long memory for both good and ill. Help her, show her encouragement, and she’ll always remember it. Betray her and she’ll never trust again. In fact, very likely she doesn’t really trust you in the first place, or anybody for that matter, because her sensitive and virtually psychic perception of human character tells her that nobody, is really a saint. She’s always on her guard, against life and against the shadowy side of others, and against the more convoluted fears and desires in herself. It takes a long time before Scorpio settles into a relationship. She may seem to. But she’ll watch for a long time to make sure that you’re what you say you are.

Of what use, you may well ask, is this kind of hypersensitivity? Why not just go out and enjoy life and take the bitter with the sweet? Fine if you’re a Sagittarian or a Gemini, but not if you’re a Scorpio. And the use of it – if ‘use’ is the word we want – is that spending any time with a Scorpio teaches you to be more aware. Aware of yourself, aware of your motives, aware of your own needs, aware of what drives others, aware of the whole invisible realm of the psyche which we ordinarily, in our extroverted blundering western culture, overlook. Why be aware? Well, if you aren’t, then you get nasty things happening – like inadvertently being hurtful and destructive to other people and yourself, and on a broader, collective level, being destructive to all cultural groups and societies. If we all had Scorpio’s insight, we very likely wouldn’t have much in the way of human cruelty, because we’d catch it first in ourselves.

But for this kind of depth the Scorpio woman pays a price; and the price is that it’s hard for her to be frivolous and carefree. Here she needs the help of a partner, and a lot of tenderness and understanding. She’ll always have secrets; all Scorpios do. But to watch Scorpio come out of its tangled brooding into a little sunshine is a lovely thing to watch, because then the real warmth and generosity of the element of water is available to other people.

Not that Scorpio isn’t a feminine sign. Remember Mata Hari? She was a classic Scorpio. There’s a mysterious and often fascinating quality about Scorpio women; they often exude a sensuality and a thinly veiled and lightly controlled passion which can be intensely magnetic. They also often inspire fear and mistrust, because you’re never quite sure what’s going on behind those eyes. But those two powerful planetary rulers point out that, along with the intensely female quality of the sign, there’s also a lot of fire and a lot of courage and a lot of pride. Don’t try to crush the pride. You’ll get almightily stung if you do. Scorpio demands respect, and this applies to the Scorpio woman as well as the Scorpio man. She’s a person unto herself, not anybody’s mate, servant, or property. If allowed to offer herself freely, she’s capable of devoting her life. But if you demand or take for granted, you’ll meet either with a cold, frosty glare and a deliberate reverse of what you ask for, or you’ll suddenly get a screaming, ranting Valkyrie running at you with a spear.

She can be temperamental.

The Scorpio woman needs an arena where she can release the fighting qualities of Mars. Releasing them in a relationship isn’t always very pleasant, and she does need to have a good fight on occasions. The warrior quality of the sign tends to take to causes, and to other people’s fights; the Scorpio woman may often be seen championing the weak or the abused, whether it’s in a political arena or a medical or psychological one. But she does need a theatre to work in; and because she thrives on crisis, she needs space to promote them, to accomplish her thirst for transformation and change. Otherwise, guess who bears the brunt of it. Scorpio doesn’t like things placid for too long; she mistrusts too much contentment. She’s always looking for the worm in the apple, and if things are quiet for too long she’ll begin to suspect something’s going on underneath. Then she’ll upend the whole apple cart, and start a quarrel or a scene, or provoke you into one, in order to find the worm. Never mind. When it turns out that there isn’t any worm after all, she’s not the least bit chagrined. She accomplished what she was really after: a change in the relationship, a deeper look, a new expression of emotion. She’d rather have you furious than bland and uninvolved.

The airy signs find her fascinating but a torment, because she seems to contain all those depths they’re so fascinated by but terrified of; and she pulls them into their emotions, which is the most difficult place in the world for the element of air to be. The other watery signs generally understand her, but they too are likely to be afraid of the probing eye that sees too much. Earth, stolid and realistic, often doesn’t understand her; earthy people may love her depth and shrewdness, but miss the fundamental point, and suddenly find themselves upheaved and staring at a reality they didn’t know existed. And fire responds to her innate theatricality, but often flies into really dramatic scenes and conflagrations. No other sign can really subdue or tame the Scorpio; all you can do is decide whether this is someone you can understand and love, and if so, then go along for the ride, because it’s bound to take you into some pretty strange quarters. One thing it will never be shallow or boring.