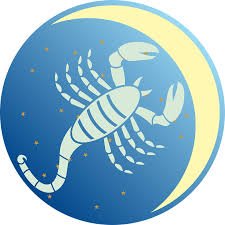 It’s better to be furious than to be bland and uninvolved.

It’s said that you can recognize a Scorpio by his stare. That famous stare has become downright notorious in general astrology textbooks and sun-sign columns. Enigmatic, penetrating, probing while revealing nothing, apparently hostile or ruthless. The man with the x-ray vision. This little cameo, along with the infamous passion which is usually attributed to the sign, has gone a long way toward making life pretty difficult for Scorpio people. After all, when someone asks you at a party what sign you are, and you look at them (penetratingly) and reply, ‘Scorpio’, and they give a little gasp and back away in fright, or instantly inquire what you’re doing later, well, it can get a little…difficult.

Scorpio is without a doubt the most perplexing and perhaps the least understood of all the signs of the zodiac. Scorpios themselves do not help this problem, since they are indeed prone to playing the enigmatic, mysterious type when they are unsure of a situation and are checking out the currents. Let’s abandon preconceptions and start from the beginning. What is it about the eighth sign that seems to provoke so much confusion, fascination and dread? Open a medieval astrological text and, if you’re strongly Scorpio – sun, moon or ascendant – you may as well take a flying leap off the Golden Gate Bridge, or turn yourself in to the police right away before you perpetrate violence or sexual assault on someone. The descriptions are that bad. Power-driven, sex-crazed, violent, warlike, vindictive, cunning: the image is a pretty horrific one. The modern equivalent isn’t much better. It’s a real nuisance having to live up to Mata Hari (who was a Scorpio) or Don Juan. Tiring, you might say. What is Scorpio really like?

Like Cancer and Pisces, this is a water sign. Earlier, we talked about water as the element which is most connected with the feeling side of life. This means that Scorpio, regardless of his habitual smokescreens – and make no mistake about it, Scorpio has the best smokescreens of any of the signs – is a sign of profound feeling and sensitivity, easily affected by the emotional currents inside him and around him, susceptible to the feelings of others, easily hurt, sympathetic, compassionate, often intensely lonely, and driven by an almost voracious need for relationship. Never mind that ‘loner’ business that has been tacked onto the sign. Scorpio is no loner at heart. Just the opposite. He longs for really profound, close union. It’s just that he’s rather discriminating about whom he allows into his psychic field, being so intensely sensitive. And also, he’s well, you might say a little mistrustful of people.

Let’s talk about the mistrust. Scorpio might prefer to call it realistic caution. Like all water signs, Scorpio has no illusions about the goods in the shop window necessarily matching those in the shop. Scorpio has an uncanny way of perceiving what other people don’t wish to be known. Often they don’t know it themselves, which makes things even more uncomfortable. It is very unnerving to feel that somebody knows something about you that you don’t know yourself. From early childhood on, Scorpio sees through hypocrisy and sham with his curiously, tuned nose for undercurrents. Being watery, he will often not be able to formulate these perceptions. More likely, he’ll have strong, immediate gut reactions to people. And you can be pretty sure that when he smells brimstone, he’s liable to be dead right. The trouble is that he smells brimstone just about everywhere.

Scorpio, you see, is privy to one of the most profound and disturbing secrets of human nature: all individuals carry within them a dark side. Scorpio cannot afford to be romantic, because he knows perfectly well that alongside mankind’s nobility and greatness he is also still an animal, and not a very attractive one at that. We mentioned that the element of air is idealistic. In principle, man is fundamentally good. The element of water is more realistic. Principles are lovely, but life is different. No wonder Scorpio sometimes seems deeply cynical. How could he be otherwise, when he is constantly barraged with the unwelcome and unoffered sight of everyone’s dirty linen, including his own?

One of Scorpio’s greatest difficulties in life is to learn tolerance. Compassion he’s got in plenty, although he will be ruthless when necessary and, unlike Piscean and Cancerian fellows, is far less likely to be swayed by a sad story when the teller has made no effort to help himself. But even with all that compassion, you usually find that Scorpio is intolerant of weakness. Suffering he responds to; he has the deepest sympathy for pain and loneliness. A great number of Scorpios may be found in the helping professions, both medicine and psychology, because they are so keyed in to people’s pain and the struggle of those trapped in their own darkness. But laziness and weakness Scorpio will not abide. His attitude is that no matter what sort of mess you are in, you can do something about it, and make of your life what you will. By the time he is ready to leave his life, Scorpio will usually have found the secret to performing this little act of self-transformation himself. Why, then, he reasons can’t others? What he fails to realize is that people are made differently, and not everyone has his capacity for ruthless self-discipline. Also, it just isn’t everyone’s path in life. Scorpio’s famous Luciferian pride – the cut-off-your-nose-to-spite-your-face variety – keeps him from recognizing that it’s sometimes necessary, even courageous, to yield.

Which brings us to another important facet of Scorpio’s nature. We’ll discuss it in more detail further on. Suffice it to say here that Scorpio has a great problem relinquishing control. This means control on a lot of levels. It may be controlling spontaneous expression or emotion outward – we all know the character that, even after a couple bottles of wine and a fifth of whiskey, still maintains his iron grip on himself, and will never, never allow himself to appear foolish or sloppy in front of others. It may be controlling other people – and this is a real problem in Scorpio’s close relationships. It may be controlling life itself – where you find the arch-manipulators who pull the puppet strings all around themselves to keep the world in its place. Whatever the nature of it, somewhere in his life every Scorpio has a large key which fits a large iron door behind which lies…..Well, you really wouldn’t want to know, would you? Take all that insight and immense sensitivity, and a liberal dash of the fierce pride and determination to carve his own path through life, throw in a dose of general mistrust of people’s motives and you don’t exactly come up with what is colloquially known as a ‘laid back’ person. Sometimes this produces an attractive and fascinating smouldering quality – hints of fathomless depths. Lucky you if you can plumb them. Sometimes it produces a downright paranoiac.

It has often been said that Scorpio, because of his great will-power, patience, persistence and insight, can succeed at anything he puts his mind to. This is generally true. Scorpio is hard to beat once he decides he’s going to achieve something. Because this is a sign of feeling, Scorpio commits himself emotionally to everything he does. Otherwise he can’t be bothered. Whether it’s becoming a nation’s leader (like Charles de Gaulle, a famous Scorpio) or changing a lightbulb, if it interests him, then it will never be just a lukewarm job. It will be done with heart, soul and body thrown in. When you are really emotionally committed to something, you’re going to put all of your talents and resources into it. Mountains are effortlessly moved in this way. Insight makes it possible for Scorpio to sidestep, avoid or outsmart – or, if necessary, bludgeon – those who might wish to pull him down, long before anybody else realizes a confrontation is coming. Martin Luther was a Scorpio. Who but a Scorpio can defy the whole Catholic Church. Teddy Roosevelt, another famous Scorpio, had a favorite expression which was his formula for success:

And the steady control of this fixed sign, which allows Scorpio to wait for years if necessary to achieve his goal, misses nothing, forgets nothing. It’s a remarkable formula for success.

The thing is, success is not usually what motivates Scorpio. Certainly there are those born under the sign who, frustrated in their emotional lives, make absolute power their ultimate goal. But that’s a pathological expression of the sign, not a genuine one. Twist anybody painfully enough and you will find they seek power to compensate. The real key to Scorpio’s enormous determination to make something of himself lies deep within his own secret soul. His heart is always a battleground, for the masculine and feminine elements war within him constantly, forcing him to delve into his own motivations far more deeply than our extroverted society considers healthy. He has the feminine sensitivity and feeling of the water signs; yet he is ruled by Mars, the god of war, and Pluto, the lord of death. We are taught very early in western culture that Scorpio’s brand of introspection is ‘brooding’, and that to indulge in it is basically neurotic or egotistical. But Scorpio sees it differently. And, after all, he’s probably right, at least as far as his own path is concerned. For him it’s not neurotic brooding. It’s a way of trying to find the truth about himself and about life. To Scorpio, skimming along the surface is offensive. He loathes superficiality almost as much as he loathes weakness of character. He must understand why he feels as he does, why he acts as he does, why others act and feel as they do. He delves and probes into regions which would send the other signs scurrying to the beaches and discotheques. Scorpio must ultimately understand himself, and come to some kind of truce with the warring forces of his nature which allow him no peace.

Every Scorpio carries within him a wound of some kind, an emotional or sexual problem or conflict or frustration which – no matter how hard he tries – refuses to be solved. He usually creates this problem himself. He has a penchant after all, for creating crisis and then pitting himself against the enemy in good dramatic style. There is more of the touch of theatre in Scorpio. This is the secret of Scorpio’s self-destructive tendency. This is really why he injures himself, goads himself with something that he cannot overcome. It spurs him to achieve something within himself, which is ultimately much more important to him than outer achievements. He can perhaps recite for himself the lines of William Ernest Henley’s poem:

I am the master of my fate.
I am the captain of my soul.

From the book “Astrology for Lovers,” written by Liz Green