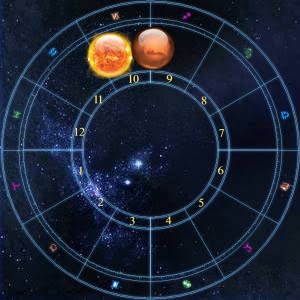 Little boys and girls with this aspect are generally known as “fresh kids” and more likely than not they never get over it. You are marked by a certain audacity – you speak out your mind at the drop of a hat – and not very tactfully either. You don’t know the meaning of the word fear, either in a physical or a mental sense. You will attack a roaring lion bare-handed, or endeavor to debate a legal point with a Supreme Court justice – all with the same aggressive assurance in your own ability. This is admirable, but it isn’t always good sense. You come in for a good many trimmings both verbal and otherwise, through an unwise selection of opponents, and throughout life you have to be careful of trying to push over stone walls with your head. You’re the kid who wouldn’t holler Uncle no matter how your arm was being twisted.

In any case, you will have to curb aggressiveness which can range from mere cockiness to downright ego mania. You have abundant energies both mental and physical. It is too bad if your abilities are lost through antagonism, or your powers dissipated in temper. Self-control should be your constant aim in both personal and business matters and you should remember when you are tempted to do or say something bold that “fools rush in where angels fear to tread.” Your vigorous personality and quick mind will carry you far when you have learned to overcome the quirks of your own nature. In a woman’s horoscope this generally brings trouble through men. If you marry a girl with this aspect prepare to let her rule the roost.

Sun conjunction Mars: You are competitive and tend to enjoy challenges and opposition. You are able to compete or fight in situations that require great physical effort on your part. Your temperament is suitable for occupations such as sports, military service or anything in which hazard and danger are commonplace.

Sun conjunct Mars: You have unusual good health and a surplus of energy that resists regimenting or sublimating. You must find personal and positive expression to accomplish your aims without becoming egoistic and argumentative. Learn to curb your disposition to override others in a cavalier manner. You may accomplish more on your own than you do in partnership, but are a leader, not a “loner.” Those who believe in you can make a difference between chaos and the completion of your useful endeavors.

Sun conjunction Mars: The conjunction gives a tendency to fever, especially if it occurs in Aries, the sign which governs the head, but it is curious that people with that configuration seem also to be able to endure a much higher temperature than others, and come unscathed through such a siege of sickness as would ordinarily prove fatal. With that exception these aspects all produce a super-abundance of vital energy which assures their possessor of the most radiant health all through life, they strengthen the constitution and make the person able to endure the harder tasks, and give him a dauntless determination and courage to face the greatest odds. Given a plan to follow he may be trusted to overcome all physical obstacles for he has both executive and constructive ability together with an indomitable will which refuses to recognize defeat. The disposition is frank and open but blunt and often brusque; they are too intensely bent on whatever they want to do to waste time in politeness and suavity; they brush the conventionalities aside without compunction and are therefore not liked by people of too fine sensibilities; they are, however, men and women of action and the foremost factors in the world’s work; but for their enterprise and energy the world would move much more slowly. Aspects to the Sun and Mars are absolutely necessary to give zest to life; even adverse aspects are better than none, for where these planets are unaspected the person is listless, vapid and he will never amount to anything no matter how good the figure may be in other respects.

Sun conjunction Mars: A born doer, with an incredible drive to accomplish and achieve in life. Your ambitions are backed up by the will to get things done. You can be very emotional, and others might find you a bit too aggressive. You try hard and you always push on toward whatever goals you have in mind. A conservative by nature, you tend to stand up for the status quo, and, if male, are probably a “man’s man.”