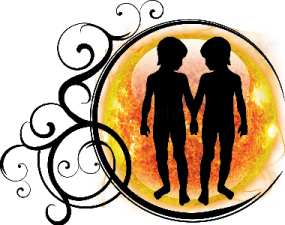 Into strange paths leads the Gemini’s desire to be himself, to think for himself, to do for himself, and, ultimately and in its highest form, to become his best self. It takes him a long time to learn that he can’t possibly be anything except himself. The self he wants to be is at first not well defined, except that it has to be different from what his father, or his mother, or his brother, is. If the urge remains in the naive be different form, Gemini stays a bad child all his life, breaking rules, rebelling against authority, dashing hither and yon over the geographical, social and emotional world in order to make sure that he doesn’t yield his individuality to one place or one wife (or husband). Education or other discipline must come to Gemini through his own volition, and when it does is his salvation; for then the passion to be different turns into creative originality in business or the arts, and Gemini forges ahead. He will generally be found in the camp of liberalism, because it is against the status quo if for no other reason.

Sometimes Gemini rebels against the status quo of his own life, and thus the sign has a reputation for supporting Reno. But if his life gives him sufficient scope to be himself, Gemini stays settled. The more his concept of what it means to be himself diverges from the early, rebellious, sensational, adventurous urges toward intellectual excellence and a sense of social responsibility, the higher Gemini gets in the world, for his sense of what constitutes his best self is not limited. It often starts with free love, breaking school rules and talking back to cops. But here, with any luck at all, the Gemini versatility breaks in; also the Gemini practical good sense. He discovers that his self might just as well be something more stable, sets his self development along another line, and gratifies his desire to be himself in progress rather than in destruction. Everything depends on his subjective reaction to himself; and it therefore becomes his moral obligation to develop to the point where he is innerly satisfied by what is constructive. He will never do anything because someone, or a convention, tells him to; but he may, and often does, grow up to the point where his behavior satisfies himself best when it is going somewhere in a straight line, instead of nowhere in a circle.