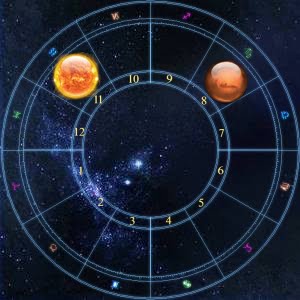 Energy is the keynote of your nature. You have a sort of quivering intensity. Your passional nature in any case is strong – love, anger, hate, fear: all the personal passions can take strong hold of you and, unless with a powerful will, can take hold pretty destructively. You can fly into rages, become absorbed in love, or give yourself up to hating with a whole-heartedness that is in many ways admirable but which, at the same time, absorbs too much of you. Your approach to things, facts, and people is strictly personal – you have little capacity for detachment and objectivity, and your outlook depends entirely on the state of your emotions, on the way people treat you, and on the status of your private life at the time. Thus you are capable of being a little petty when your feelings are hurt or you are aggrieved or injured; you don’t take a broad view of these things, and you are capable of being vindictive and revengeful, of holding grudges and “getting even.” Mars is the great get-evener, and one way or another you’ll settle your score with anyone who has offended you.

In a man’s horoscope, you are a fighter going through life with a chip on your shoulder and a pretty dangerous fellow to attack. You’ll fight like a cornered bull and very often win.

In a woman’s horoscope the quarrelsomeness is not so great, though under the surface calm there’s a boiling sea, and it indicates likelihood of emotional psychic involvement through the father and some ill health too, or difficulty with, the husband. You rule your home – and not always by subtlety either. You have a way of making men toe the mark which they generally seem to like.