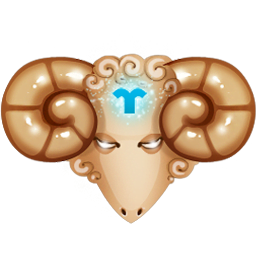 “Well now that we have seen each other,” sad the Unicorn,

The Aries boss won’t be popular with lazy employees. If you’re looking for a temporary soft spot to fill in the time while you seek a permanent career, or a place to pick up a little spending money during a lull in your life, you’d be well advised not to work for an Aries. This man simply can’t abide half-hearted work or a lack of enthusiasm in those around him. He’ll expect you to be as devoted to the company as he is, and just as intently concerned with its future potential. He’ll probably hire you fast, promote you fast-and point out your mistakes just as quickly.

If he suspects you are coasting, you’re liable to get a blunt and direct-to-the-point tongue-lashing, with no feel­ings spared, but you’ll also get a second chance, perhaps even a third or fourth one, if you admit you’re wrong and promise to do better. You might as well be prepared to work overtime for the Aries boss frequently. He’ll expect it. On the other hand, if he’s a typical Aries, he probably won’t frown at the clock or glance at his wristwatch when you arrive late in the morning or take an extra half hour or hour for lunch. He’s not a clock watcher himself. Because of his highly individual personality, he’ll under­stand that you can’t turn on creativity like a light switch at nine in the morning and turn it off again at five in the afternoon. He’s a boss who will often ask you to work an extra Saturday, but he’s also likely to accept the excuse of your grandmother’s funeral when you want to attend that baseball game, though you’d get the time off just as easily by telling the truth. He can see why, on sudden impulse, you’d like to root for your team on a spring day.

Though he’ll usually be generous with vacations, salaries, raises and all such matters, he’ll fully expect you to drop everything-personal plans, emotional ties, travel commit­ments or what-have-you-if something of great importance pops up at the office. I hate to say it, but I do know of one Aries boss who had a business crisis requiring the round-the-clock services of a valued employee. The fact that the business emergency occurred on a day this employee was. scheduled for an appearance as a bride was incidental. What if she had made plans for six bridesmaids, a flower girl, a ring-bearer, and a reception for three hundred afterwards?

The Aries boss couldn’t understand why all that couldn’t be postponed, including the honeymoon, for an urgent meeting concerning a million dollar deal which could put the company on the big board. He would be willing to delay his own marriage for such a crisis, so why wouldn’t you? What’s the matter, aren’t you loyal? This is admittedly an extreme case, but you’ve been warned.

It’s a rare Aries boss who isn’t more lavish than the ordinary employer at Christmas-time. Depending on how strong an Aries he is, you can count on getting a larger boius check than your friends in other offices-or even a hard-picked, expensive gift, which could be something yol’ve been wanting for a long time. A Mars boss is not likdy to be stingy (unless there’s a conflicting Moon sign or iscendant).

He’s not as susceptible to flattery as other astrological sigis, but it won’t hurt you to pay him a sincere compli-meit now and then. If you let him know in a straight-forvard way that you appreciate him as an employer, you adnire his efficiency and you think he’s just about the smirtest boss in town, your job security is guaranteed. Hovever, do or say this only if you really believe it and me.n it. He will have contempt for an employee who gui?les his praises just to make points, while he’s secretly doibtful of the ram’s ability to head the company. The Arts is not ordinarily a good judge of character, but he’g so ensitive to other people’s opinions of him that he can prety well tell if he’s disliked by those around him day aftff day. To be liked is his secret need. You might never guss it from his self-confident air and his brave front, butundemeath all that swagger he’s desperately in need of theapproval of his fellow man. That includes you, his wife and his dog-even the stranger on the elevator. Despite tha surface independence, nothing makes him happier thai to be looked up to and recognized as the capable peron he knows he is. On the other hand, nothing can male him as depressed, cranky and sometimes downright pety as suspecting that those who work for him dont appove of his methods or don’t realize his value and pot.ntial.

I you hear a rumor that the company is about to go baikrupt, don’t look around for another job too quickly. Yoi may not need a new job, after all. If anybody can puU thecompany out of trouble, save it at the last minute from finacial disaster under the most dire circumstances, and male the entire operation seem rather like Moses parting theRed Sea, it’s your Aries boss. He’s independent, daring anc venturesome. His drive (unlike the more emotional dire of the Scorpio) is vital, from the spirit, and almost alwys idealistic. (He may lose out to the equally deter-rniied Scorpio pitted against him, however, and be unable to natch the steady ruthlessness of Pluto-though hell recover from the loss and win somewhere else.)

Aries initiates. If there’s a suggestion box around the office and you drop in enough workable, creative ideas, you’re almost sure to advance to a high position quickly with this man. He appreciates employees who care enough about the company to make suggestions and who are original in their thinking-as long as they make it perfectly clear they have no intentions of trying to outshine him.

Will power is one of the strong features of the Aries man. He fights off all minor ailments and he won’t give in to serious illness either. Sometimes he can delay or entirely prevent disease by sheer positive thinking. If he does have a cold or virus infection (probably accompanied by a high fever), he’ll get dressed to come in to the office for some urgent business and by the time he arrives, the fever may be gone, to the mystification of his doctor and the suspicion of his employees that he was really at home goofing off.

The Mars will is so fantastically strong that your Aries boss (who will probably be fairly lucky at gambling) can go to the racetrack and practically root his horse into the lead. You’re bound to feel the effect of such a forceful personality, so expect plenty of fireworks, excitement, chaos and intense activity around the office. Your business day will seldom be uneventful. Something will always be happening.

There will be nothing lethargic about him, and there had better not be anything lethargic about you. Your Aries employer will probably have little interest in any previous bad job record you held before or in the reasons why your former boss may have fired you. He’s the best bet to approach under these circumstances. Because of his con­viction that he’s going to make the future what he wants it to be, Aries is seldom bothered or concerned by the past. Yours or his.

The Mars executive is too proud to let others know they’ve hurt him. In spite of quick outbursts of temper (which won’t last long or be vindictive, and will be for­gotten as soon as they’re over), he will hide quite well those things which truly affect him deeply. The ram won’t admit his dependence on anyone but himself. He does need others-far more than he will ever admit, but his , strength comes from inside, and he can always find a way . of going it alone when he must.

If you can admire his energy and courage, though you find it impossible to imitate; if you can make up for his impulsive, slapdash ways by patiently filling in the details he’s overlooked in his haste (and do this unobtrusively), he’ll probably pay you more money than you can make anywhere else and you’ll be with him for life. Tactfully attempt to keep him from doing or saying rash things hell regret later. Remind him gently that those to whom he directs his temporary righteous anger may be Very Impor­tant People and they could react in a way which will hurt his business if he alienates them.

That’s the important thing to remember about your Aries boss. In spite of his great independent spirit, when his idealistic, optimistic enthusiasm gets him in over his head, he really needs your help, faith and loyalty. Give these to him in abundance and you’ll never find a pink slip in your pay envelope. You won’t have to worry when missing a taxi in rainy weather makes you late for work, if you need an extra^week’s vacation time for an operation-or about someone younger and more efficient replacing you. More than any other kind of boss, he’ll repay loyalty with loyalty. Keep a full supply of aspirin in the desk drawer for fre­quent emergencies, polish up your smile, don’t take his outbursts seriously-and you can throw away the classified ads. You’ll want to stay where the action is.