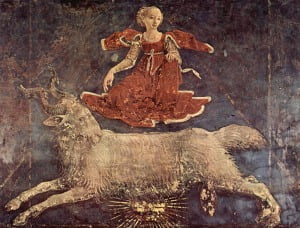 The second decanate of Aries is pictured in the sky by ERIDANUS—the River of Life—flowing from the never-failing fountain of perpetual youth. Here we find the severity of Mars tempered by the magnanimity of the Sun, which has sub-rulership over this decanate. It is the Leo section of Aries.

And as Leo is natural ruler of the house of love, so the water, symbol of the emotions, bespeaks the affectional influence. Only through the affections, only in the sacred precincts of love, does man quaff the coveted elixir that imparts eternal life. So those born under this section of the sky may well seek this most hallowed source of power.

They become rulers of men through their inherent power to sway the minds of others. They are born to lead rather than to serve, for this sub-influence of Leo lends a persistent ambition for power. The heart is somewhat joined to the head, and the more this union is cultivated the better; for the greatest lever for attainment obtainable by the natives of this decanate is a noble affection.

Bismarck, who pioneered in statesmanship, had his Individuality in this portion of the zodiac, the Sun being there at his birth. Le Plongeon, who pioneered in archaeology, deciphering Mayan inscriptions and writing a work on Atlantis, had his Mentality here, the Moon being in this decanate at his nativity. And Annie Besant, leader of the Theosophical Society and economic pioneer, had her Personality in this decanate, it being on the Ascendant when she was born. It is the decanate of EXALTATION.

A woman, outwardly cloathed with a red garment, and under it a white, spreading abroad over her feet, and this image causeth nobleness, height of a Kingdom, and greatness of dominion: 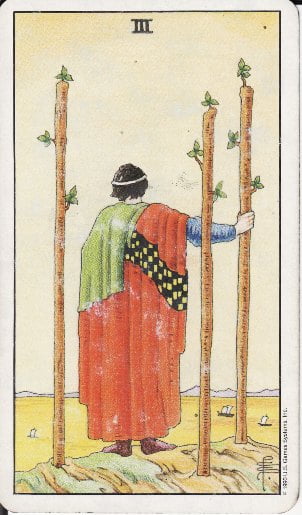 Interpretation: Ships have been launched. Have taken a calculated risk. Waiting to see what the results will be. Making a new idea work. Personal destiny under human control. Green: growth and freshness. Red: Will to action. Checkerboard: Stability. Yellow Sea: Conscious choice of action.

Reversed Interpretation: Difficulty or need to put plans in motion. Not being realistic about situation. Afraid to get started.

Alan Leo: If the native could accomplish all that this indicates, and take advantage of all the opportunities that this ascendant brings, he would join head and heart, and thus quickly accomplish the mission of life; which is the turning of Thought into Wisdom. He will have heart experiences, and will probably have his emotions called out to the full; for it will bring feeling prominently into the life, and will awaken something of the deeper side of his sympathies. It will bring the rejuvenating principle to the fore, causing new life and the advent of fresh experiences. For it is the influence of summer that follows spring, and denotes a period when some of the ambitions may be realised, and when by merit and power he may rise to a higher and better state of things. It will bring a little more of the speculative element, also more enterprise and a loftier spirit, in fact, there is every prospect of gaining many advantages and making much progress while under the influence of this ascendant. 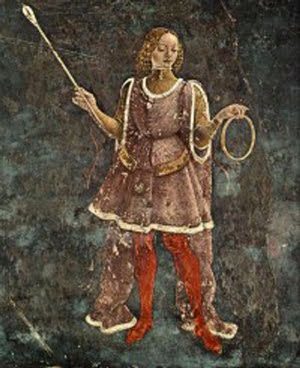 PERSEUS, with the wings of thought on his feet, the helmet of courage on his head, armed with the sword of righteousness, protected by the shield of beneficence, and holding the blood-dripping head of Medusa in one hand,pictures the third decanate of Aries. The sub-rulership of Jupiter diverts the aggressive energies somewhat into religious and philosophical channels.

Consequently, this Sagittarius division of Aries has vast spiritual possibilities when its natives espouse some progressive line of thought, or use their restless never-failing energy in protection of the weak. Perseus gained renown through his daring exploits in relieving oppression. And even as he severed the head of the Gorgon Medusa, which turned to stone all who gazed upon it, so the people of this decanate have the power to destroy the crystallizing influence of licentiousness, and like the David-version of the same tradition, cut off the head of the Goliath of selfish greed. They may become the valiant heroes who wage a successful fight against the sordid conditions that oppress civilized life. In the philosophical field of endeavor they find a useful work in releasing Andromeda, the human soul, which all too often is found chained to the rock of materialism to be devoured by lust and envy.

Of those born with the Sun in this decanate I may mention the pioneer Theosophist, Win. Q. Judge. As expressing the Mentality in this section of the heavens, George Sand, world’s greatest authoress, and spiritualizer of common sights, is a fitting example. And Dr. Rajendra Lal, whose antiquarian and research work are known far beyond his native country, India, has his Personality polarized in this decanate, which was on the Ascendant at his birth. It is the decanate of PROPAGANDA.

Figure of a white man, pale, with reddish hair, and cloathed with a red garment, who carrying on the one hand a golden Bracelet, and holding forth a wooden staff, is restless, and like one in wrath, because he cannot perform that good he would. This image bestoweth wit, meekness, joy and beauty. 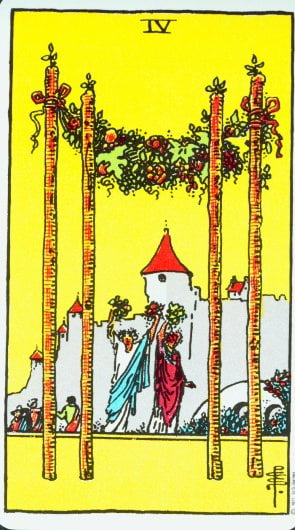 Perfection or completion of a thing built up with trouble and labour. Rest after labour, subtlety, cleverness, beauty, mirth, success in completion. Reasoning faculty, conclusions drawn from previous knowledge. Unreadiness, unreliable and unsteady through over-anxiety and hurriedness of action. Graceful in manner, at times insincere, etc.

Interpretation: Relax and enjoy the rewards. Homecoming, Reunion. The strength and stability of a committed relationship. The ships have come in.

Reversed Interpretation: Lack in Pleasure. Shaky relationships. The desire for material security and status has created a conflict with the need for action and creative expression.

Alan Leo: This denotes the probability of some travel, and will very likely bring an opportunity of going abroad, or of taking some very long journeys. This ascendant brings a somewhat philosophical and religious frame of mind, and marks the advent of loftier views; and it will probably awaken in the native a desire to investigate some of the deeper problems and inner mysteries relating to consciousness and the future: at least, this should be the state of his mind. To those who are as yet unawakened it will cause a more rebellious spirit and a tendency to go against established law and order; but even this will have its good side, for it will tend to stir up the nature to action until a realisation of true law and order comes as the result of the mental activities. If the directions are very evil there will be danger of legal troubles if any dispute or contention should arise; but otherwise this ascendant gives promise of a more fortunate period commencing. 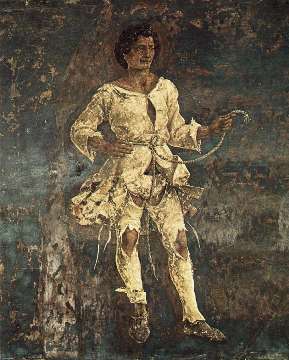 To picture the possibilities of the first decanates of the zodiac the masters of old traced in the sky a starry triangle. This constellation TRIANGULUM symbolizes the divine fire that those born under the first decanate of Aries have the capacity to inhale. When living in their highest they are true leaders in thought; for the triangle, ever used as a symbol of flame, is also used as a symbol of mind. And again, by its three sides united into one figure, it represents the union of body, mind, and spirit – thus teaching the importance of co-operation. The pioneer spirit of Aries is expressed in this decanate in all its fiery fullness. Zeal and enthusiasm mark the progress of its children. The Aries-decanate of Aries, sub-ruled by the aggressive lord of war, ever seeks new worlds to conquer.

And when the thoughts are permitted to soar untrammeled upward, even as the triangle points to heaven, those born under this influence become the harbingers of better things. But when the lower marital power gains sway they become the avenging agents of death and destruction.

Dr. J. M. Peebles, the great pioneer of spiritualism, had this as his Spiritual polarity, having been born when the Sun was in this decanate. Emperor Paul of Russia had this portion of the zodiac for Mental polarity, the Moon being there when he was born. And Proclus, the great Greek Neoplatonic philosopher, who scaled the height of occult initiation and so impressed his thoughts upon the times in which he lived, was born with the Mars-decanate of Aries Ascending, this being his Physical polarity. It is the decanate of ACTIVITY.

A black man, standing and cloathed in a white garment, girdled about, of a great body, with reddish eyes, and great strength, and like one that is angry; and this image signifieth and causeth boldness, fortitude, loftiness and shamelesness; 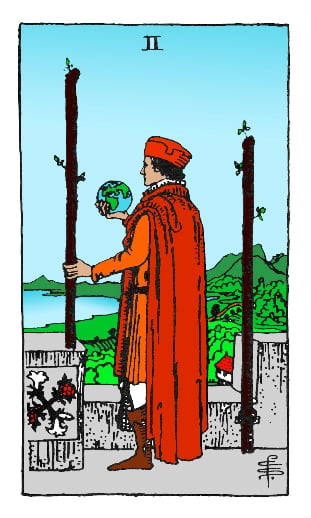 Interpretation: Calculated risk. Meeting of minds. A situation that requires leadership and decision making. Venturing forth with power. Setting plans in motion. Manifestation of the spark of the Ace.

Alan Leo: All matters relating to the head, and also all “first house” affairs, will be prominent in the native’s life. He will want to lead and be at the head of things, and will in all probability meet with some recognition in the sphere in which he moves. He will be more aspiring and ambitious, will desire progress, and will wish to reform existing conditions. He will be actively inclined towards intellectual pursuits, and will be very anxious to learn and gain all the knowledge and information he can. This decanate of Aries rising indicates that he is becoming more progressive, also that he is ready to take a keener and deeper interest in life. He will have abundant opportunities for progress, but be has arrived at that stage wherein the progress will be rather of an intellectual and mental than a purely physical nature. The influence of the planet Mars will come prominently into his life, giving him much mental energy with considerable enthusiasm.