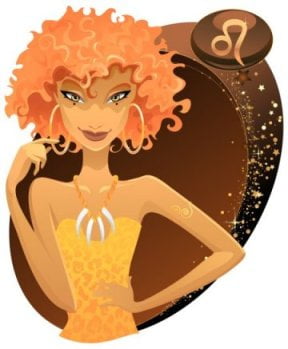 Meek, mild, colourless and self-effacing this lady is not. She’s a queen, and expects to be treated like one. Even the more repressed Leo woman will show this side of her nature, although it may be heavily disguised under socially acceptable manifestations of good behaviour. The truth is that the Leo woman is intensely individual and not very good at being everybody’s favorite model of conventionality. More often than not she’ll be a troublemaker, or a woman who causes people to gossip about her. She has an intense need to live her own life in her own way, and that life has got to have a little colour and a little dynamism to it. Have you ever watched caged lionesses in a zoo, pacing back and forth and back and forth, their eyes furious and glaring, because they haven’t got room to stretch out and run? That’s what happens to the Leo woman when she’s caged either by social expectations or a limiting relationship.

The Leo woman needs some place to express her creative impulses. Whether these are in the form of artistic talent, organizational ability, public relations ability, or whatever, she needs to be somebody special, and to do something extremely well that will earn her some sort of recognition. Recognition is as necessary to the Leo woman as the Leo man. If the Leo woman doesn’t find an outlet, she’s liable to try to get recognition either by getting every available male to fall in love with her, or by trying to play Pygmalion and shaping the lives of her husband and children. And exacting due recognition from them later for all she’s done. This dynamic, energetic woman must have a stage on which to perform. Otherwise, she’s liable to throw you off yours.

Leo women are often highly competitive. This may be in their field of work, where they need to shine. The Leo woman shouldn’t have to be in a position of answering to somebody else all the time; she needs room to work with her own ideas, and come up with her own designs. Often Leo women are also highly competitive with their own sex, and it isn’t really a sign that makes for good sisterhood unless the other sisters are willing to play Greek chorus to the main role. The Leo woman must have the role of leading lady. It’s very typical to find her with a bevy of friends who all lean on her and need her advice and help. In part, it’s because she’s strong and also generous, and needs to be needed. In part, it’s because she doesn’t like competition.

Often Leo women extend this tendency to be the support to a weaker role into their relationships. You often see Leo women with some gentle and pleasant and basically indecisive men, who worships at their feet and gives them the devotion they need so badly, and who is also willing to be moulded. Many Leo women are afraid of stronger men, because they need to dominate; and this can be a great problem, because while it satisfies the Leonine needs it denies the feminine ones. And all too often the pattern in relationship is for the Leo woman to take charge, to make the decisions, to be the strong partner, and then to bitterly blame the man for being weak when she in fact has never given him a chance to be otherwise.

This is why it’s so essential for the Leo woman to have some area of life where she can shine independent of her family. If this need is satisfied elsewhere, then she can relate to the people close to her in a less compulsive way.

The Leo woman is also very concerned with the image she gives in society. You won’t often find her mousey and self-effacing; she’s more likely to dress dramatically, act dramatically, and attract attention because of her sheer style and charisma. Take a Leo like Jacqueline Kennedy Onassis. Self-effacing she’s not. She has a Scorpio ascendant, so is perhaps more underplayed than many Leo actresses and performers; but style is terribly important to her, and so is her dignity. Leo women don’t like to play the fool or the victim. Their pride is ferocious.

Their gifts lie both in their capacity to be so intensely individual and so intensely alive, and in their loyalty and generosity to those they care about. Even more than the Leo man, the Leo woman is likely to offer devotion and steadfast love in relationships – provided she’s treated well. But that’s not fair enough, because she’s somebody special and she knows it. Never, never, never take Leo for granted. The lioness has claws, and isn’t averse to making a scene that would make more socially inhibited signs turn white and cold with shock. If you’re looking for a woman who is also an individual, an individual to the hilt, then you’ll like Leo. In fact, you’ll even love Leo, for it’s a sign that inspires intense responses. One thing that won’t happen: you’re not likely to overlook her.