It would be an easy map, if that were all; but there is also first day at school, religion, fathers. . . . .verbs that take the dative, chocolate pudding day, getting into braces, say ninety-nine, threepence for pulling out your tooth yourself, and so on ….. 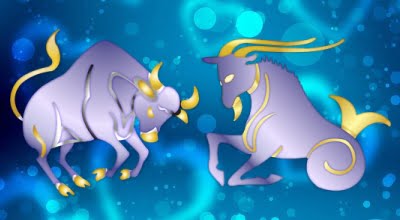 The shining virtues of solidity and dependability surround the Taurus Bull and Capricorn Goat with an aura of earth-colored sureness. Life to Taurus and Capricorn is not all grey and brown, nor black and blue. But you’ll seldom find useless pastels, optimistic yellows or extroverted reds in their personal halos. When these two animals meet at the zoo, the ground shakes with the vibrations of destiny. Who knows what successes lie ahead when a Bull and a Goat get into harness together? They do.

Neither is in any doubt as to where he (or she) is going. To the top. In a large city or a small town, all the way to the top – to the place where it’s peaceful, quiet, financially comfortable – where they’ll be isolated from silly dreamers who muck up the air with foolish illusions, fantasies, and the doomed failure of misguided idealism.

The Bulls and Goats are both modest and reserved, and they both use moderation as an inner alarm, or security system, to warn them of any wayward emotions which might short circuit the smooth mechanism of their ambitions. Now, that’s not to say that these people are dull, stodgy, humorless and unimaginative plodders. (Taurean Shakespeare, a plodder?) As for Capricorns, nearly all Goats have some sort of creative or artistic talent. Many of them draw as well when they’re only doodling as professionals do when they’re working, and some of them do actually become successful painters or writers. (Capricorn novelist Henry Miller is both.) As for the Bulls, they have music in their souls, regardless of all the common sense in their heads. Many Taureans are famous singers, musicians or composers. Others just piddle around on the piano, hum into a harmonica, or pluck a homemade zither. Nearly every one of them sings in the shower when they’re sure no one can hear. In the humor department, Taurus is the original Falstaff, or court jester, full of throaty chuckles and funny one-liners. The average male or female Bull will slide into a comic monologue with little urging, in the living room or at the office.

The Capricorn Goats also possess a dry and droll sense of humor. Their keen observations on the comedy of life are amusingly clever, even though they normally make their remarks with a straight face, which only makes them funnier. When something really turns these people on, they can weave funny, whimsical tales of dry humor that would be the envy of a professional comedian. So you see, a combination of Taurus and Capricorn can be warm and amusing as well as steady, stable and steadfast.

Still, you shouldn’t expect the Marx Brothers. Each was born under a negative Earth Sign, which does not provide fertile soil for frivolity. Goats and Bulls are funny, but they’re not hilarious, and they won’t lose an inch of dignity while they’re cutting up. You won’t find many of them dancing wildly in noisy disco dives. A nice quiet evening at home, watching movies of the family’s vacation at Yellowstone National Park, is more their speed. Taurus and Capricorn constitute what has been called the “Backbone of America.”

Since theirs is a 5-9 Sun Sign Pattern (see the back section of this book) the areas of romance, children, religion, travel, education and show business are, percentage-wise, the probable pastures where the Goat and Bull will find a common interest. From there, they may engage in an endeavor which will unite them in a glorious strength of effort and purpose (if their mutual Luminaries are harmonious) or which could result in a hopeless locking of horns and total boredom (if the Sun and Moon Signs between their horoscopes are unfavorable). However, even in the latter case, they can always use the natural sympathy of all 5-9 vibrations to bridge their difficulties. It’s difficult for any two people who are influenced by this Sun Sign Pattern to remain angry or opposed for long. The path to reconciliation is always easy, and visible to them, when they desire to find it.

You might see an occasional Capricorn wearing a feather headdress and love beads, smoking peyote in the park and openly flouting convention, but if you do, you can be sure that he (or she) is a lost and lonely soul, trying desperately to prove something – heaven knows what. It’s not a natural state of dress or behavior for the normally staid, formal Cappy, and there’s certain to be a mild neurosis, or a dissatisfaction with Life, lingering in the smoke trailing out of the peace pipe.

You may also run across a rare Bull who drives a flashy yellow Stingray to the bank and shakes a pink tambourine while he makes his hefty cash deposit, but he’s probably just trying to get the attention of a female teller to satisfy his sentimental Venus yearnings. It’s really best in the long run to know who and what you are and be true to your own Sun Sign image. A Ram shouldn’t try to be docile and meek. A Virgo would be miserable trying to be careless and casual. A Bull and a Goat should not try to be wild gypsies. It doesn’t become them. It often becomes Aquarians, but not these two.

One area these Sun Signs are highly unlikely to be involved in together is the drug scene. Most Taureans don’t really need the extra kick of a high, because their senses are so acutely tuned in on their environment. The Bulls can sniff a sweet pea or a zinnia, in pure ecstasy for hours, contemplating its form and color and scent – until they get stung by an angry bumblebee. As for the typical Capricorns, they wouldn’t dream of indulging in recreation against the law, and certainly not one that might delay or obstruct their Saturn-directed, ambitious climb up the mountain – or cause a scandal.

The Goats want, above all, to be accepted and respected by their friends, relatives and neighbors, and by society at large. When scientists get around to taking their noses out of their test tubes and seriously investigate astrology, they’ll find an amazingly small percentage of Taureans and Capricorns in “halfway houses,” or in drug and alcohol rehabilitation centers, as compared with the number of other Sun Signs. There are, of course, occasional exceptions that prove the rule, but very few.

I know a Capricorn jeweler in Cripple Creek, Colorado, named Steve, who has mapped all the spots where the wild strawberry grass (a mystical herb) grows the greenest, in the hills behind the small mining community. He gathers it, dries it, dips it in gold or paints it – then uses it to make abstract pictures of Western scenes to sell the tourists in his “Crucible.” You can always count on Cappy to find a practical angle for anything. This particular Goat wears modified sideburns as his concession to the Aquarian Age, but somehow, on him, the sideburns only add to his dignified, Dickens-like appearance, and he still doesn’t quite fit the picture of a mod swinger.

Speaking of jewelry, many Capricorns and Taureans share with Leo a love of precious gems and metal. The flamboyant-type Leos like to wear them, the flashier the better. The Bulls like to dig them out of the ground, creatively stirred by the excitement of discovery, as they burrow deep into the bowels of the earth for turquoise, gold, silver or diamonds. Capricorn likes to mold them into practical art objects, and the Goat often satisfies those secret artistic yearnings while burnishing the brass and leaning over the Bunsen burner. However, the final objective of both the Taurus Bull and the Capricorn Goat is to find the vain Lions or Lionesses to buy their wares, so they can make Money, which is spelled S-E-C-U-R-I-T-Y. By the way, Steve Mackin, the Colorado Cappy jeweler I mentioned, doesn’t always buy his metals from a Taurean miner. He finds many of the materials he turns into jewels fit for a pharaoh – in junk yards. What more appropriate place for a billy goat to roam and nose around in? The great talent of the Saturn-ruled lies in finding hidden treasures, buried among the discarded trash, twisted tin and broken glass of Life. Both literally and symbolically.

Capricorns become adults somewhere around the age of two or three. Taureans decide on the scope of their future financial empires at around the same age. So it doesn’t matter how old or how young these two are when they team up. Their goals will be identical. Both the Bull and the Goat are wise to the ways of the outer world. It’s their own inner worlds that give them trouble. Each is brimming over with a sentiment he or she won’t show – and each is deeply in need of affection and appreciation for which he (or she) won’t ask. So there they stand like two mountains, side by side, starving for human comfort and closeness, each stubbornly resisting the other’s timid overtures of friendship or demonstrations of open affection.

Children are tiny persons who see, and demonstrate with simplicity, the magic their elders have forgotten as they’ve passed through Life’s sobering experiences. Since Taurus and Capricorn have spent so little time as children (having grown mature at the age of two or three) they may have missed some magic tricks along the way. How can they make up for those lost years of childhood? Easy. Taurus can say to Cappy, “Let’s go skinny-dipping in the creek, and the last one in is a rotten egg!” Then Cappy can say to Taurus, “Let’s go down to the junk yard and shoot off some fireworks!” While they’re there, they can climb an apple tree, play frisbee with a frog, smell the sweet peas and zinnias, swing in an old tire, and then – ONE-TWO-THREE-GREEN-LIGHT! They’re both home free.