The more quickly this horror is disposed of the better. 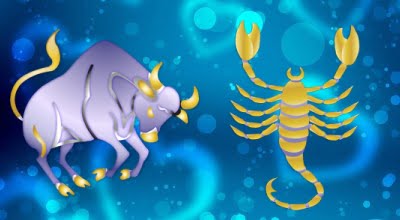 It is not, of course, always a horror, although the potential is there. When they really try, Taurus and Scorpio often get on well together, sometimes superbly. If the Moon Sign of one is conjunct, sextile or trine to the other’s Sun, they can chart new worlds of the mind or spirit, in space or on the ground. It can be a beautiful, lasting relationship in science, literature, the arts – or in simple human closeness. When they have a negative aspect between their Suns and Moons, they will remain opposed and powerful enemies, until one or both of them evolve to the concepts of tolerance, compassion and unselfishness.

As with all 7-7 Sun Sign Patterns, Scorpio and Taurus each sense in the other the missing qualities that would make him (or her) whole and complete. The magnetic polarity of their opposition on the astrological wheel tugs on them rather fmnly – for good or evil. Scorpio is everything Taurus wants to be. And Taurus is everything Scorpio would like to be. However, each of them would almost rather literally be caught dead than admit it. Scorpio is not a dual sign, yet the Eagles live in two worlds at the same moment – the world of wherever their compulsive soul-yearning takes them and the visible, material world, believed in and seen by ordinary mortals. Scorpios float somewhere between both, a law unto themselves, as inscrutable as the Great Pyramid of Giza. To disguise themselves, and to keep people from seeing them dangling in the air like that, most Scorpios wear a mask. It could be a mask of sweet gentleness, icy detachment or cold practicality. But beneath it, they are all smoldering, boiling, bubbling cauldrons of intense emotion.

Taurus owns no false faces. Like the other Earth Signs, the Bulls don’t particularly like to dress up on Halloween – either to fool people or to frighten them. They just want to make them laugh (and make them behave). The Bulls live firmly and tangibly in one world only – Earth. Good old, familiar, safe Terra Firma. They are what they are, and nothing or no one will ever change them from what they were born to be – veritable mountains of dependability, courage, patience and determination. Although the average Taureans weren’t born with Scorpio’s power of penetration and steely will, nor the Eagle’s awesome regenerative potential, they do embody the true and genuine inner calm Scorpio longs to possess, the total emotional control Pluto-ruled men and women only pretend to own. It is for this that Scorp envies the Venus-ruled Taureans. (Now and then, a Bull is born whose Moon and Ascendent are in Scorpio – then look out! I mean, this person is a powerhouse supreme.)

As for the typical Bulls, they wouldn’t bother to plod across the street to either own or imitate Pluto’s emotional intensity, but they would trudge thousands of miles, even leap over barbed wire fences – uphill, if necessary (if no one was looking) – to gain Scorp’s ability to know without any kind of calculation … to simply know. Taureans would give all their gold to be able, like the Eagles, to stare into someone’s soul and learn all that person’s secrets. If only they could master this ability, the Bulls could build their empires faster. And if Scorpio could master, in tum, the Taurean impassivity toward Life’s magnetic emotional storms, they could accomplish their mysterious purposes with far less toll on the inner psyche.

Naturally, when these two get together in any sort of association – business, family, friendship or love – and decide to lend each other the use of their individual talents and virtues, working side by side, they can change destiny.

A blend of their qualities through a close “relation In-ship is never bland. It can tremble and shake with both highs and lows. I have a Taurus friend with a Scorpio brother, and they’re equally devoted to their Piscean mother. But when the Bull moved into a new house, he was too busy with the pressures of several financial crises to get in touch with his Neptune mother right away. Besides, he didn’t want to worry her with his personal problems. One night, the Bull and his wife invited the Scorpio brother for dinner, and he accepted. They prepared his favorite meal, the children were all washed, and brushed, and excited about seeing their uncle – but he didn’t arrive. When they called his home, he wasn’t in. The puzzling Pluto silence continued for several days. Then one morning, a note came in the mail from the “missing” Scorpion relative. It said, simply:

“There’s a very lonely lady in the Bronx who hasn’t heard from you in too long a time. After you get in touch with her, I’ll be happy to come for dinner.”

The direct, uncomplicated Bull was red-flagged into fury over his brother’s undeniably devious behavior. Why didn’t he just come right out and say he was angry when he was first invited to the house instead of pulling the mystery routine and the silent treatment?

Why? Because he’s a Scorp, and that’s the way Scorpios are. Simple directness has no sting to it, you see, and this Eagle was determined to sting his sibling. The surprise element is necessary for completely effective Pluto retaliation. Yet, shortly afterwards, when the Bull’s financial woes had reached the emergency stage, the Scorp offered to lend his brother the cash he needed, without even being asked. That’s also the way Scorpios are.

One of the qualities Taurus possesses, and Scorpio usually lacks, is a sense of the ridiculous. There are Eagles who possess a fine sense of humor, but it’s seldom along the lines of the absurd. Humor is Nature’s great balancer. It bestows a sane perspective to life, and helps the Bulls avoid the twin (no relation to Gemini!) destructive influences of self-pity and egocentricity. When you laugh, you’re surrounded with warm, happy people. A joke attracts a crowd. And when you laugh at yourself, everyone adores you – because you’ve made yourself as human and fallible as they know they are themselves, allowing them to feel, for a brief moment, not so aware of their own vulnerability. Perhaps the lack of such easy and spontaneous humor, of the type which attracts a crowd, is why Scorpios often prefer to travel alone and incognito. It’s difficult for the Pluto-ruled to feign fallibility. Besides, they have no need to be adored.

A Bull might approach a Scorpion in a typically playful (and rare talkative) mood, and call out: “Hey! Why are you hiding behind that bushy beard and the dark shades? Are you afraid people will find out you’re really Barnabas the Vampire? I’ve got it! The beard and glasses make you feel safe, is that right, Barny?” (lf the Scorp is a lady Eagle, substitute “Vampy” for “Barny” – sans the beard, of course.)

“Right, Barny? (Or Vampy.) They replace the security blanket you chewed on and took to bed as a kid.” (The Bull is thinking of his or her own blanket- Teddy-Bear stage of childhood.)

Scorpio will not laugh. The Scorpion will just murmur quietly, without so much as the twitch of a whisker, “Perhaps.”

But Taurus persists. “No kidding? Looking like one of the Smith Brothers on the cough drop box makes you feel secure?” Whereupon, Scorpio will smile Pluto’s faint smile of warning, prior to deadly attack, and remark in deep, Velveeta cheese tones …

“You’re jealous, aren’t you? Jealous that I have a beard, and you don’t. Is it because a beard symbolizes masculinity and you’re sensitive about that, for some reason?”

Now, nothing in heaven or hell can wound the ultra-virile Bull as cruelly as an insinuation, in jest or otherwise, of that nature. The Scorpion has struck again, whether the name is Barnabas the Vampire, alias Vampy or Barny – or Leonard the accountant. The Eagle has drawn blood. Taurus retreats, hurt and puzzled that a simple, good-natured joke laid an egg, floundering in water over any Bull’s head. Of course, when pushed too far, the Taureans won’t retreat. They’ll paw the ground, snort – and charge – totally destroying the Scorpion, who will then, in his (or her) final moments, whip around that dangerous tail, deliver the fatal sting – and they’ll both fall down dead. Naturally, I’m referring to an imaginary scene between the Nature symbols of the two Sun Signs. In a similar human encounter, you may translate it your own way.

Speaking of Nature symbols, I trust the reader is not confused by the reference to Pluto-ruled people as both “Scorpion” and “Eagle.” An Eagle is a Scorpion regenerated into the higher octave of his or her own Superconscious, capable of projecting all the finer, positive qualities of the Sun Sign. Like a kind of reincarnation within a reincarnation, so to speak. All Scorpio people are Eagles part of the time. If they keep trying, they can remain on this high level permanently, lifted from the Scorpion’s sands, into the Eagle’s skies of enlightenment, through aspiration – on the wings of the repudiation of revenge, soaring into a dedication to defend the helpless.

Many Scorps do appreciate humor, but normally only when it can be seen or projected in an impersonal way. Such as on stage or screen, or among friends – watching. Very few Scorpions find it hilarious when the giggles are at their own expense, and they’re not cheery back-slapper types, as the Bulls can be, when they’re feeling especially jolly. The typical Scorp will chuckle sincerely at funnies only when in the company of good and trusted friends.

Scorpio Mike Nichols, American comedy writer, author, performer and di-rector (a rather large hunk of comedic talent), doesn’t exactly have a reputation for being a continual bag of laughs in his personal life when the joke is on him. The same thing is true of country comedienne Minnie Pearl. She’s a howl on stage, but privately she’s an intense, dedicated Scorpio lady, with passionate po-litical and other convictions.

Scorpio and Taurus do have some things in common. They both have a tendency to be reserved with strangers. Neither of them are blabbermouths, and neither is inclined to make long speeches unless there’s something important to say. Also, both equally dislike being rudely questioned by inquisitive people. But their reactions to such intrusions are quite different. Scorpio will use subtle strategies to keep his (or her) secrets secret. When subtlety fails, the Scorpio will simply lie, justifying it as an inalienable right when dealing with those who would violate his (or her) sacred privacy. (At any other time, Scorpios are the very souls of integrity, however.) The silent implication is: “You pried into my personal affairs, and you got what you deserved.” (The snooper should be grateful for the lie. It’s better than receiving a sting from the Scorpion tail. Sometimes, both defense measures are employed, simultaneously.)

The Bulls have an equal sense of privacy, and you won’t find them telling all they know, any more than Scorps do. But the Bulls are not subtle, and they’ll seldom bother with a lie. Taurus will squelch a prying person directly, with a plain statement of fact, like: “Mind your own business, jerk, and buzz off.

No one can say “no” more emphatically, and mean it, than Taurus and Scorpio. If they say it to each other, that’s the end. But when they say “yes” to one another, a solid, lasting friendship will develop. Because the Bulls and Eagles have one more thing in common. Loyalty. For those they love and trust, they’ll move mountains, against any odds. They both consider a kindness exactlyas they consider a loan at the bank – to be paid back promptly, with interest.