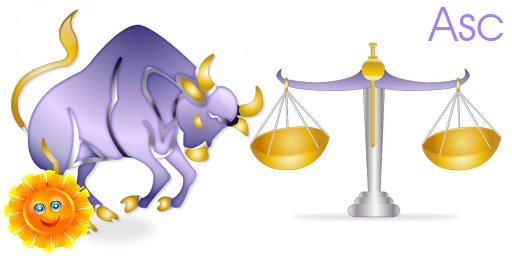 These people are polite but determined, and if they exercise good judgment, doors of opportunity open pretty easily. Libra’s catch-phrase for success is, “It was who I knew, not what I knew, that put me in the seat of opportunity.” Word of mouth and “one hand washes the other” partnerships are Taurus with Libra rising’s bread and butter. Yes, Taurus can be bull-headed and obtuse, but with obliging Libra rising Taureans are keenly aware of how they’re being received. So adjusting their behavior to fit the occasion is an easy matter. They know how to benefit from enhancing other people’s resources, setting up win/win situations that produce a snowball effect: They give two and get four, they give eight and get sixteen. So a Likable Libra personality improves Taurus’ (the Banker’s), ability to fill his coffers. Not a bad deal, don’t you think? They learn quickly to put some icing on the cake, to be diplomatic, fair, and equitable. Deal-making is their forte; they can succeed in any vocation really, but litigation, investment banking, or stockbrokerage are a snap for them.

If these Taureans create problems for themselves, it might be with their willingness to oblige. At the moment, they might agree to something too hastily, realizing only later, in a time of reflection, just what they’ve gotten themselves into. They suddenly comprehend that they’ve agreed to something that doesn’t seem fair to their “give and take” Libra. Now they’re faced with changing the terms of the agreement after the fact, leaving themselves open to appearing less than true to their word. This is rarely a good strategy for someone who relies a great deal on business and personal relationships. Focusing on the bottom line, keeping the machinery of their relationships well-oiled and in good working condition, these are Taureans’ keys to success.