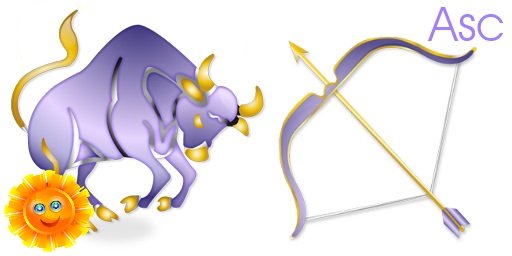 “Sagittarius” derives from the Latin “bull-slayer,” which might make it seem like a Sagittarius rising sign is a poor complement to a Taurus ego, but not so: Sagittarius gives the bull a smiley face and winning ways! Sagi-magi-ragi-ttarius, Mr. Happy-Go-Lucky, slays most of Taurus’ less-buoyant traits, such as bull-faced frowns and closed-minded stubbornness. If these Taureans retain their determination and bottom-line sensibility, they’re upbeat, inspiring, and quickly able to endear themselves. They’re often gifted politicians with a “big kid” demeanor. They’ve a bit of “Jolly Old King Cole,” and they know what they’re doing. Even when some Taurus bullishness prevails, Sagittarius’ onward and upward attitude is usually able to clean up the mess and move along. When the bull throws all his weight into what turns out to be a poor decision, creating a fiasco of colossal blunders, the leaps-and-bounds of Sagittarius the traveler puts him way downrange and out of sight when the crap hits the fan. Sagittarians are lucky people!

Problems, however, can arise if Sagittarius arrogance couples with Taurus’ stubbornness. They become rather self-centered and pompous. This is especially true if in formative years the grown-ups were too permissive. As adults they can become “holier-than-thou” given their “spare the rod, and spoil the child” background. Another area of concern is Sagittarius’ agility and nimbleness leading them to opinionated judgments and a “pie in the sky” outlook. But if their Sagittarius optimism remembers to promise only what Taurus can realistically deliver on time and in good order, all is well. If they avoid these potential mistakes, they end up in the winner’s circle every time.