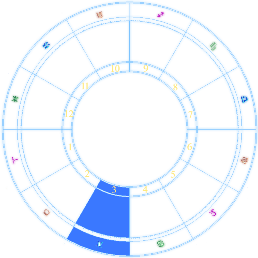 The third house is concerned with explorations, investigations, and inquiry and research of all kinds. It also rules connections, communications, wires, tubes — anything that we can get through with our body, mind, voice, letters, what-have-you. It is here that we explore and search for the limits of our life, whatever we are working with at the moment. A very mental house, concerned with finding, furthering, peering, and all manner of questioning. Traditionally rules short journeys, siblings.

The 3rd house continues the drama set forth in the 1st and 2nd. The 1st is the new start, the 2nd is the new body or what is drawn forth in response to the 1st, and the 3rd is how the situation develops to its fullness. It has to do with the working out and exploring of all the details and ramifications of what is forming.

Ten house from six: the civil service. Mother of the diseases, what cause a disease, including the idea of contamination.