“We can talk,” said the Tiger-lily “When there’s anybody worth talking to.” 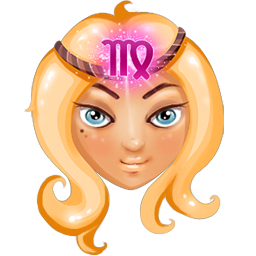 If you have a Virgo boss, be kind to him. He’s probably secretly troubled and unhappy. Virgos are not born to be high-powered executives who lead others forcefully and they soon regret the decision to bite off more than they can chew. Of course, due to individual planetary positions and aspects in the natal chart, there are certainly some Virgos who are extremely competent in positions of power, but they’re few and far between. You can probably count the ones you know on the toes of one foot.

The typical Virgo is at his best as the power behind the throne, the one who dependably carries through the original |f ideas of others. He’s happier and more successful in the checkmate position of chairman of the board than as the president of a huge corporation who has to cope with the problems of his employees and present a jolly company image. The very last thing most Virgos want is to glorify the self and become a listening post for everyone’s troubles, Goodness knows, they have enough troubles of their own to keep them busy worrying for a lifetime, even if man) of them are imaginary.

Coping with the pressure of being responsible for the impulsive actions of progressive associates, firing orders a subordinates, and pushing public relations, while juggling the finances of big empires, requires a thicker skin and e fatter ego than the average Virgo possesses. One reason he’s such an unhappy misfit as an executive is because he tends to see the trees clearly and completely miss the forest -yet this is the very trait which makes him such ac indispensable jewel as the man who guides the president ol the firm. He may not be the one who sees the big picture, but he can erase the fuzziness from the pictures the more aggressive people paint so carelessly. If anyone can manipu­late complicated projects and see them through with £ minimum of disastrous mistakes, it’s a Virgo. He can take the wildest schemes with a thousand dangerous, dangling loose ends and make them work. A talent like that should never be wasted up front where there’s not enough privacy to accomplish his meticulous miracles. In fact, if he’s forced to perform his organizational magic before a public audience, the Virgo is likely to look as if he’s double-talking, when he’s really not. The Virgo whose hidden vanity has caused him to be put in such a position usually ends up accused of this very thing.

A Virgo will pull few punches when he’s asked for a critical opinion, and let’s face it, an executive often has to smile and say “yes” when he means “no,” and frown and say “no” when he means “yes.” It’s all part of the game. But a Virgo calls a turnip a turnip, and he’s bewildered when people turn on him because he didn’t pretend it was a tulip.

Consequently, the Virgo in a high-powered position sometimes resorts to deception in self-defense, and -since deception is emphatically not one of his innate talents, he ends up being accused of being downright sly and hypo­critical. What a pity, when Virgo hates hypocrisy so much. But that’s the price he pays for sitting in a chair he wasn’t meant to occupy. The endless, chatty luncheons with clients who have to be wined and dined and catered to would drive the average Virgo into a hermit’s cave after a few months, and a few years of it might actually give him a serious mental breakdown.

Any Virgo who searches his own soul eventually comes up with the knowledge that he’s better off doing the actual work of running the machinery inside the organization and letting someone else pose for the pictures. If he’s truly dedicated to his work (is there a Virgo who isn’t?), he secretly scorns the social and political extra-curricular activities the head of a firm is forced to engage in, because it causes him to neglect his duties-and be assured that neglect of duty is not something a Virgo takes lightly.

Still, if the business is a small one with, say, under a dozen employees, a Virgo may do very well as the captain of the tugboat. He certainly won’t let it hit any unforeseen snags because he’ll have every potential danger charted in detail, upside down and backwards. But big business and the typical Virginian simply don’t blend, always allowing for the occasional exception to the rule. A Virgo with a Cancer ascendant and a Capricorn Moon, for example, would be a horse of a different gait. Such a Virgo at the head of a large company can be a real winner, just as the average Virgo at the head of a small company is usually successful. They also excel in leading scientific, experi­mental groups, where painstaking research is the keynote.

This boss will not overlook the sloppy mistakes of a secretary who constantly misspells words, wears ink blots on her thumbs and forgets to water his geraniums. You’ll have to be alert and on your toes if you want a promotion from Virgo. Never tell him the appointment is for three o’clock when it’s really for two-forty-five, or you’ll face a cranky, irritable boss who won’t hesitate to point out your fumble with hairsplitting frankness. As for reminding him in self-defense that he himself mislaid the papers he needed for the same meeting, forget it. Instead of causing him to be more tolerant of your errors in relation to his own – exceedingly rare goofs, he’s far more likely to glare at you with extreme annoyance. Try it more than once and you may end up without a job. A little criticism goes a long way with your Virgo boss. On his side, that is. As far as you’re concerned, resign yourself to plenty of it. There’s just one way out and one way only. Don’t make mistakes. It’s really quite simple.

Once you’ve adjusted to his perfectionist attitude, you’ll find your eagle-eyed Virgo boss is kind-hearted and fair. He won’t want to hear the details of your latest romance, since sentiment bores the typical Virgo, but he’ll listen with sympathy to your request for a leave of absence because your left small toenail needs attention. Sick leave will be understood. Office flirtations and careless habits will not. Keep your desk tidy, don’t flash around the office in mini skirts and heavy make-up, never brush your hair over his papers, and listen carefully to all his instructions. If he approves of your grooming, your work habits and your brain, he can be a surprisingly generous and kindly, con­siderate man to work for. He has his little idiosyncrasies, but don’t we all?

Men who work for a Virgo boss face a slightly different problem. He’ll expect you to come up with creative ideas and to be aggressive in the area of promotion and sales­manship. In fact, he’ll depend on you to fill in these gaps in his own make-up. Just be sure you handle yourself with modesty. He knows you have more direct drive than he does, but he’s also aware that he has more organizational ability, not to mention practicality and caution, and he won’t be thrilled if you let it become obvious that you could run things without his close supervision. He’s undoubtedly correct. He usually is, which may be a little frustrating until you get used to it and learn to respect him for it.

Your Virgo boss may have a drawer full of indigestion remedies and a mind full of facts and figures, but he also has a heart full of compassion and the ability to straighten out inter-office disagreements. He won’t give out Jaguars, or mink capes as Christmas bonuses, but he will pay you what you’re worth and won’t cheat you. Remember that he’s entirely capable of sizing up exactly what you are worth, too. It’s difficult, if not impossible, to fool him.

Don’t expect him to get excited about glamorous bubble promotions. He may not be overly imaginative, but he has enough imagination to visualize such bubbles bursting with a loud bang and a spray of water, which may leave you all wet. Be sure your suggestions and methods of working have a sound foundation in fact, or he’ll dismiss your schemes as daydreams and he may dismiss you, too. You may get impatient frequently with his constant splitting of hairs and faultfinding criticism, but after all, you can’t just say to a superior that “It’s a drag to nag.” So you might as well accept his critical habits gracefully. It won’t hurt you to let him shape you up a bit, anyway.

Always tell him the truth. It’s useless to lie to him. Frankly, your Virgo boss may strain at gnats-but hell seldom swallow a camel.

If you give him the understanding support and respect he needs, he’ll never hurt you. Inside, he’s really a gentle soul and often terribly lonely, married or single. He doesn’t make friends easily, and hell be touchingly grateful for your encouragement. Like all Virgos, he lives with a secret dream and isn’t nearly as isolated from emotion as he seems to be. Let him know you’ve discovered that his bark is worse than his bite (even though his bark is gentle and quiet), and he’ll step down from his ivory tower. Never mind if the other employees call him stingy. Go to him when you’re really in trouble and see how wrong they are.