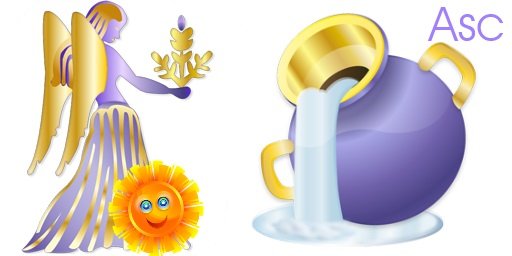 Virgoans with Aquarius rising are electrically charged with a sharp sense of humor and a vivaciously friendly attitude. And they always have an urgent understanding of exactly what to do when the pressure’s on and the crap hits the fan. They’re ship-shape, with an “all for one and one for all” attitude. These analytical Virgoans’ troubleshooting skills are often applied to advertising, electronics, all sorts of technical fields, and sometimes powered flight, so they’re often found working on computers, in hangars, at airports, or for high-tech juggernauts like NASA. And when they’re in uniform, as Aquarius often is, they tend to wear that uniform in a snappy Virgo style with an officer’s decorum rather than a raw recruit’s overexuberance. When things threaten to spin out of control and the stakes are high, Virgo’s eagle eye for detail ensures that no warning light will blink unnoticed. Even in vocations with less dire consequences, these Virgoans are vigilant troubleshooters, keen on precision. They’re good salespeople who respond to their client’s every concern, even the little things that might seem trivial.

[..]Still, with their sun in modest Virgo, these people are less inclined to be stiff-minded and argumentative. But their Aquarius “will to disagree” can be triggered if they sense that they’ve been underestimated. They are fiercely independent and highly sensitive to disrespect. When they’re told they’re wrong, they hear, “You’re stupid.” The key for them is to be willing to engage people of opposing viewpoints in real conversation, to talk with them rather than at them, to hear their explanations, and to explain and justify their opinions rather than clobber people over the head with controversy. If they’re on edge and defensive, they’ll almost always be perceived as too difficult to work with, and others will fail to see the helpful, modest soul beneath the uptight exterior. The secret to success is backing up their good effort with a cooperative attitude.